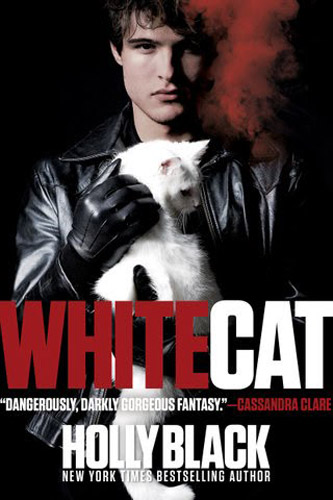 Holly Black’s WHITE CAT leaps instantly into action. The hero, seventeen-year-old Cassel Sharpe, wakes up barefoot and shirtless on an icy-cold night, about to step off a roof at his boarding school. Cassel assumes he was sleepwalking and hopes to be able to put the incident behind him. But after he’s rescued by the fire department, the school authorities kick him out to avoid the legal liability resulting from his death if he were to accidentally kill himself while sleepwalking again. Cassel is devastated. He desperately wants to escape the deviant lifestyle of his family and be normal, and he sees boarding school as his one, big chance to accomplish that.

Cassel comes from a family of “curse workers” who can, with the touch of a finger, injure people with magic. Their various powers range from manipulating thoughts and emotions to physically harming others, up to and including his grandfather’s ability to put a “death curse” on someone which will instantly kill him. Curse work is illegal, and his family lives on the edge of the law, many of them working for the local mobster. Even when they aren’t working curses for hire, they make money as grifters. But though Cassel’s amoral mother raised him and his two older brothers to see all of life as a gamble and a con, several crucial factors have kept him from falling completely into the cesspool of his family’s unrepentant corruption:

Unlike the rest of his family, he isn’t delusional about his own omnipotence when he runs a con. All of his cons are small potatoes stuff, like being a bookie at his boarding school for minor bets, which cause little or no harm to anyone. Cassel is capable of empathy, and he doesn’t like to hurt other people, which can’t be said for almost everyone in his sociopathic family. Most important of all, he apparently has no curse-working ability, which means he wasn’t born with a power that society claims can only be used for evil. Unfortunately, there is one, huge thing that links him powerfully to his family’s taint. They are covering up for him the fact that he apparently killed his girlfriend when they were both very young teens.

Cassel has mixed memories about this event. It feels like a dream that happened to someone else. He can clearly remember standing over his girlfriend’s body with blood on him, but he has no recollection as to why on earth he would commit such an unforgivable crime against someone he loved–and still loves and misses years later.

In spite of the enormous psychological burdens Cassel carries, he makes choices that are anything but weak. He doesn’t give in and become a criminal as his two brothers have. And he doesn’t crawl off in a corner and whine about his terrible fate. Instead, he shows amazing initiative for someone his age by getting himself into a private school and away from his family, while hobbled with the reasonable doubt that he can never fully achieve his dream of normality. Since he isn’t normal, he can only try to present an illusion of it to others, and doing that makes him feel guilty, because it seems too much like running the same old cons his family has engaged in for generations.

The concept of the con is at the center of this story, and the core of any con is the ability to tell lies convincingly and to keep secrets. That’s a very creative twist on the two major sources of conflict in any fictional story, no matter what the genre, lies and secrets. In plot-driven, action/adventure, mystery, suspense and thriller stories, lies and secrets keep the hero in constant danger from the villain and often unable to know for sure who the villain is. In character-driven, relationship stories, lies and secrets stand in the way of trust, which is the foundation of emotional intimacy, commitment, and stability in romantic, familial and friendship connections. WHITE CAT is a story with both of these types of plots intertwined, a mystery/suspense plot and multiple, character-driven relationship subplots. And overarching and unifying all of that is the primary, “A Plot,” Cassel’s conflicted relationship with himself as he attempts to find out who he really is by breaking through a multitude of lies and secrets layered on top of him since birth by his family and society as a whole.

It is incredibly difficult to seamlessly intertwine, as Holly Black has done, action and relationship plots without emotion bogging down the action or action fizzling out the emotion. But she does a brilliant job of keeping action and emotion constantly in balance as she skillfully leads us through Cassel’s discovery of who among the people in his life are his antagonists and who are his allies. The glue she uses to pull it all together is a theme throughout the book of determinism versus free will. That’s a rather deep philosophical concept for a popular-fiction novel whose goal is to “merely” entertain, but it is this profound and universal human struggle which makes Cassel’s journey one that all teenagers (and most of us adults) can relate to. The need to break free of limiting societal labels and expectations about who we are and who we can hope to be.

Cassel lives in a harsh world, so this book has a very somber tone. It is not as dark, perhaps, as many of the dystopian novels so popular right now, but it has a similar ultimate villain. The destructive, adult, power structure within a corrupt society which mandates that an entire group of people is inferior because they are tainted by innate qualities they never chose to have.

Because Cassel is fighting against institutionalized bigotry, the odds are completely against him in the greatest gamble of his life. I think it is for that reason that the end of this book, while it resolves the major questions posed by the story, does not resolve Cassel’s core concern about constructing his own identity, rather than having a depraved one forced upon him by society. I look forward to seeing how Black will ultimately resolve Cassel’s dream of escaping a life that is nothing but a series of empty, dehumanizing cons.

I recommend this book to anyone who enjoys urban fantasy, and most particularly to fans of Scott Westerfeld and Justine Larbalestier.

Kudos, also, to the publishers for the gorgeous cover!