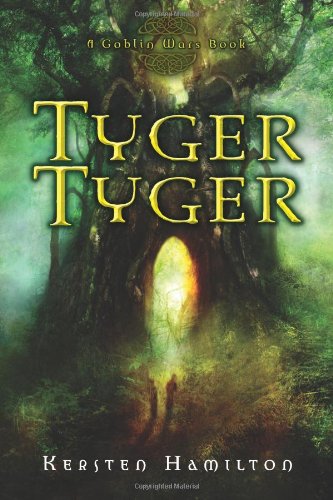 Sixteen-year-old Teagan “Tea” Wylltson speaks to apes in sign language while working as an intern at the Chicago zoo. She’s determined to win a scholarship to a prestigious veterinary school, but in the meantime she’s surrounded by fascinating people. Her father is a school librarian who loves to read aloud to his children and claims to be a descendant of Merlin. Her mother creates beautiful–and often frightening–illustrations of goblins for children’s books and is an orphan who was raised by a band of Irish Travelers who immigrated to America. Tea’s five-year-old brother Aiden is verbally precocious and musically gifted due to having a photographic memory, and Tea calls him a human GPS system because he never gets lost no matter where he is. Her best friend Abby claims to be psychic, has had dreams of Tea being in terrible danger, and comes from a family with ties to the Mafia.

In spite of all the quirky people around her, Tea does her best to live a normal life and stay on track with her ambitious career goals. Part of that plan is to refuse to get involved with boys, because they’re nothing but a waste of time. But when handsome, charming Finn Mac Cumhaill is delivered to her family’s doorstep by a social worker, in spite of herself, Tea is intensely attracted to him. Finn is part of the Irish Traveler family Tea’s mother belonged to, but Tea’s mother hasn’t seen any of them in years. Finn has been living on the streets since he was twelve, for almost six years, and would still be there now if he hadn’t broken his arm and come to the attention of the authorities when he went to the hospital.

As unsettling as Tea finds the sizzlingly mutual attraction between her and Finn, this is only the beginning of the problems that Finn brings into her life. Far from being simply a cute boy with a sexy, Irish accent, Finn is a battle-scarred warrior with a very special mission, and Tea, her mother, and her little brother are disastrously tied into it.

I absolutely loved this book! Unfortunately, it is extremely hard to talk about it without inserting spoilers into the review, but I will do my best to not go beyond the spoilers the publisher itself has used in the blurb on the book cover. This book is the first in a series called “Goblin Wars.” That’s a term I haven’t heard much in YA urban fantasy, but in actuality, most urban fantasy authors would label the magical creatures this author is calling goblins as “fae” or “faery.”

The number one thing I look for in any novel is great characters, and Kersten Hamilton massively succeeds at that. Tea and Finn’s enemies are not just horrifyingly evil, as all good villains should be, but intriguing creations in their own right. And the people Tea loves are so appealing that the reader can vicariously share in Tea’s gut-wrenching anguish on her family’s behalf as she desperately tries to stop the goblins from harming them. Tea’s mother is witty, kind and fiercely loyal to her family. Her father is adorably eccentric, and her little brother Aiden is a an absolute scene stealer. Tea’s best friend Abby has a relatively small part in the story, but she provides welcome comic relief amidst all the darkness of the evil goblins.

Finn is a fabulous love interest. He’s not just a good-looking, heroine-worshipping piece of the scenery in a female-centric book. He has far too much to do to just sit around adoring Tea. In addition, his personality is sharp and exciting, and the grace with which he endures the terrible hand fate has dealt him is admirable. From his initial romantic banter with Tea, all the way through the many goblin-created ordeals they face together, their growing trust of each other is built up the hard way, by risking their lives, side by side, to save Tea’s family.

Tea herself is an unusual combination of beautiful nerd and courageous fighter. Though her main goals in life have been her studies and helping animals, when dangerous paranormal circumstances demand it, she’s able to be as fierce a warrior in her own way in defending the people she loves as Finn. I’m also extremely grateful to the author for refraining from having Tea whine or wallow in teenage angst. She simply sees what needs to be done and gets on with it.

As for the world-building, I’ve encountered all the various types of magical creatures presented in this book in other YA urban fantasies, but not with the Irish-mythology twist this book gives to them. I’ve read only one other YA series, by Maryrose Wood

, that employs Irish mythology and uses Irish characters, including a love interest who speaks in Irish brogue. However, the tone and focus here are very different from Wood’s, whose books are written in first-person in a comic, chick-lit style.

There is plenty of dark, scary action in this book for those who like thrilling adventure, and there is a great deal of character development and interaction for those who love strong and compelling characters. Which, to me, is the perfect mix in a great urban fantasy read.

In a year packed with wonderful YA novels, this book is a real standout. I can’t wait for the next installment! I particularly recommend this book to those who enjoyed Julie Kagawa’s Iron Trilogy