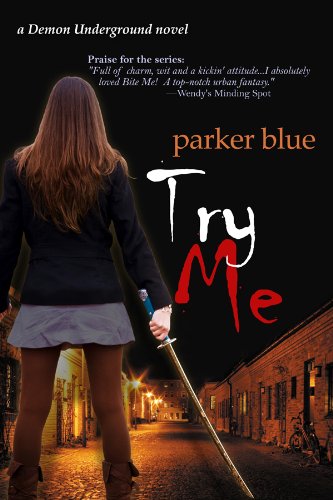 In this second book of an outstanding young-adult, urban-fantasy series, eighteen-year-old Val Shapiro, who is one-eighth succubus demon, continues her efforts to keep the city of San Antonio, Texas safe from evil, magical beings. Her love interest from book one, Detective Dan Sullivan, who has been her human partner in her job working for the police department’s Special Crimes Unit and her almost-boyfriend, has not forgiven her for beheading his former fiancée, even though the woman had become a vicious vampire.

Val’s newest wild adventures are rooted in several sets of enormous, competing demands. She needs to retrieve an earth-shakingly powerful object called the Encyclopedia Magica which has been stolen. If she fails, horrible demonic catastrophes will ensue. Alejandro, a vampire leader, continues his attempts to maintain peace between vampires, part-demon humans, and ordinary humans in San Antonio, and he continually pressures Val to help him with this vital mission. Unfortunately, the tenuous détente between part-demons and vampires is threatened by the fact that someone is poisoning vampires. Most interesting of all to readers who are big fans of paranormal romance, Val has a new partner in fighting paranormal crime, Shade, a teenage boy who is part shadow demon and, in spite of his demon nature, has the sweet temperament and gorgeous blond looks of an angel. Val’s succubus side, which she has named Lola, is intensely attracted to Shade, and Val is worried both that Lola might harm Shade, and that Val’s own purer feelings for Shade will be tainted by Lola’s demonic lust.

Wow! There is no sophomore slump here! This book has it all. Fantastic world-building, engaging good guys, very scary bad guys, lots of exciting action, and a paranormal romance that is both innocent and hot at the same time. I personally prefer magical Shade immensely to merely human Dan, and I was delighted to see Dan ousted in Val’s affections. I also continue to be wild about Fang, Val’s half-terrier, half-hellhound sidekick. Fang can talk to Val telepathically, and their conversations provide hilarious comic relief to the book.

This second book has expanded Val’s relationships in the part-demon community, providing her with an extremely compelling coterie of friends who are like a family to her. I thoroughly enjoyed all these relationships and the opportunity to widen my experience of Val’s magical world.