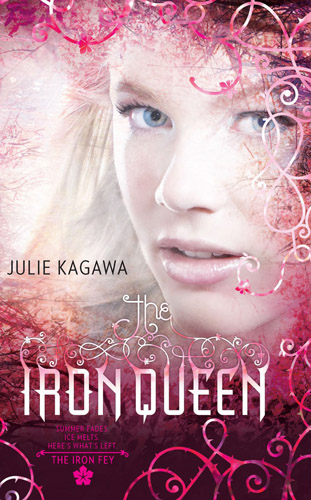 The final battle against the Iron Fey

If you have not read the other two books in this series, The Iron King

and The Iron Daughter

, do not read this review, because it will contain spoilers for you.

At the end of The Iron Daughter, Meghan Chase has been exiled from the land of the fey. The fey Winter Prince she loves, Ash, has chosen to go into exile with her, losing his title as prince in the process. They are joined by her long-time friend and protector, the Summer fey Puck AKA Robin Goodfellow. But soon after the three of them have found a way to settle into the human world, they are summoned back to the fey world to save it from the Iron Fey. These dangerous fey have a new “false king” who is determined that nothing short of total annihilation of the rest of the fey will serve his purposes, and the only hope of the land of Faery is Meghan. She killed an Iron King once before, and maybe she can kill one again.

My favorite part of this book

is the romance between Meghan and Ash. Now that they are committed to each other, Kagawa gives them much more time onstage together. It is great to have many more chances than in the previous two books to spend time with them as a couple. Individually, Meghan has grown up a lot over the series, showing resilience, backbone and fighting spirit in this book. Ash is, as always, the consummate warrior, utterly fearless and unbeatable on the battlefield, but he is also an amazingly sensitive and gentle mate for Meghan–in short, the ideal romantic hero.

Puck continues to be a central character in this book as he was in the previous two books. Grimalkin is a key player in the main storyline as well–which made me very happy because he is one of my favorite characters in the series.

Once again, as in the previous two books, Kagawa excels at world-building. Her imagination is awe-inspiring, as her Faery world is extremely complex. The theme of a journey continues in this book as for the other two, with an interesting bit of magic that allows Puck, Ash and Grimalkin to accompany Meghan in her life-or-death mission to take down the Iron King. For those who like lots of adventure, skirmishes and outright battles, this book will be a welcome addition to their collection of fantasy novels.

A particular aspect of the ending (which I won’t specify to avoid a spoiler) may disappoint those who are rooting for Ash and Meghan as a couple. Fortunately, there is a sequel, The Iron Knight, which will be released 10/25/11, which continues their story.

I just read a galley of The Iron Knight that I received through NetGalley, and I learned through an interview included at the end of the book why Kagawa decided to write a fourth book in this series when she had originally planned it as a trilogy. She states: “The Iron Knight came about because I love Ultimate Noble Sacrifice endings, and my editor…liked HEAs (Happily Ever Afters). I had a very specific character arc in mind for Meghan, and Iron Queen was supposed to be the end of her journey….But my editor convinced me that we couldn’t leave [the series where it stopped at the end of The Iron Queen with] Meg and Ash apart….”

It sounds like it was the idea of the editor, not the author, to write one more book (and only one) to tie up this series, but Kagawa figured out a way to write it that she herself could believe in and live with. In it she continues the theme that she does so well in the other three books in this series, that of a heroic journey, and it is written entirely from the point of view of Ash. Fans of this series will not be disappointed, and those who love Ash will be particularly pleased to be allowed to spend so much time with him. In addition, Grimalkin plays a major role, which for me as a huge fan of his was wonderful.