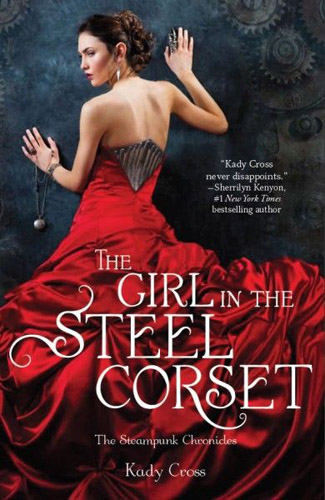 Sixteen-year-old Finley Jayne lives in an alternate-universe Victorian England where familiar, modern-day technology exists, but with a brass-and-steam twist in keeping with the actual technology of the real Victorian times.

We discover within moments of meeting Finley that she is not an ordinary girl. One side of her nature is very mild-mannered and Clark Kentish, and the other side is an extremely powerful being with super strength, super speed, and super healing from injuries. Whenever Finley is in danger, her fear instantly triggers rage in her super-powered side, and it takes her over completely–often to the point that her mild side doesn’t remember anything that happened while the wild side was in control.

Not only is the wild side a powerful fighter, it is also much bolder around attractive men than the mild side of virginal Finley would ever be. The mild side is romantically drawn to a rich, handsome, eighteen-year-old Duke, Griffin King. Griffin has magical powers of his own which allow him to recognize Finley for who she is and support her in developing her powers in a way that she can become in control of them, rather than the other way around.

Finley’s wild side, on the other hand, finds Jack Dandy more to her taste. He’s an extremely good-looking, twenty-something crime lord, who falls hard for Finley, but refuses to take advantage of the innocence that is apparent even when her wild side is in control.

Both young men would sacrifice anything to keep Finley safe, but Finley herself is fully equipped by her natural powers to defend and protect herself. Finley uses those powers to defend others as well by teaming up with Griff and his closest friends, who also have special abilities. Emily is a brilliant scientist who invents machines and conducts major surgery, and Sam is enormously strong. He got that way when Emily saved his life by rebuilding his shattered body with metal after he was attacked by an automaton (robot) programmed to kill by an evil villain called the Machinist. Together Griff, Finley, Emily and Sam are determined to stop the Machinist from the terrible destruction he causes by turning automatons who perform menial tasks all over London into killing machines.

The only other steampunk I’ve been exposed to is Cassandra Clare’s Clockwork Angel, but it’s quite an interesting premise. I looked up the genre and learned that this book

fits right into its parameters, with a focus on technology and science (and often mad science) as envisioned in Victorian science fiction by such authors as Robert Louis Stevenson (The Strange Case of Dr. Jekyll and Mr. Hyde), Jules Verne, H. G. Wells, and Mary Shelley (Frankenstein). The style of clothing worn by Finley, though, is nothing that appeared in a Victorian novel. It is in keeping with the styles worn in our modern world as part of the steampunk cultural and philosophical movement. Steampunk fashion utilizes pieces of clothing that were fashionable for men in the Victorian era (and Edwardian era secondarily) such as top hats, cravats, monocles and wool suits. For women there are corsets that are unlike what was worn in the Victorian era, though, because they are made of steel if worn under the clothing (rather than whale bone) or softer cloth like velvet if worn outside the clothing. Women also dress in frilly, short skirts with bulging petticoats that remind me of the “cancans” so popular in the 1950s and which are often visible below the skirt line. Along with these ultra-feminine skirts, they often wear big, clunky, knee-high (or thigh-high) leather boots that have been popular in the West for incongruous female fashion combinations since the teen years of the Baby Boomers in the early 70s.

I’m not sure if steampunk fashion in our world uses tattoos, but this steampunk novel certainly does. I think that’s because it is a subgenre of urban fantasy. I’m hard pressed to recall any urban fantasy with a kick-ass female protagonist that doesn’t incorporate tattoos, and usually magical ones. (And if the author doesn’t include enough to suit the publisher, they’ll often have the cover artist invent some, as for the Mercy Thompson books by Patricia Briggs.) The ones in this book are of the magical variety.

I found Finley as a character quite intriguing. I always enjoy it when a female character has super strength, but this book gives that a special twist with the concept of Finley’s having a true dual personality vs. a fake persona to keep the superhero identity secret, as is common in comic books.

Finley’s two love interests are certainly desirable guys but, personally, I’d have preferred it if the author had created just one love interest for Finley who embodies the charisma and dash of Jack and the magical powers of Griff, along with the sexy melancholic temperament (tragic past and emotional sensitivity toward the women they care about) which both young men have in common.

Emily is a wonderful character, and her complicated relationship with Sam is an interesting secondary romance.

The villain is suitably evil, but the explanation of his motivation makes him more complex than is usually found in most urban fantasy I’ve read. The mixture of magic and pseudo-science is also a fascinating combination.

All in all, this book has excellent characters with interesting relationships among them, and lots of action brought on by both conflicts among the troupe of characters supposedly on the same side, as well as by the villain they together must defeat.

I look forward to the sequel.