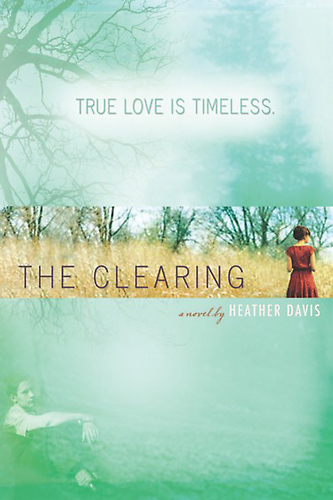 The Clearing by Heather Davis

Escaping from the aftermath of a bad relationship in which her boyfriend Matt verbally and physically abused her, teenager Amy chooses to start her senior year at a country school and live with her great aunt in a single-wide trailer. Even though it is Amy’s idea to move there, she is hurt that her mother and stepfather don’t put up much of a fuss about it, and she’s depressed that she’s left behind all her friends. In her new town, she feels alienated and unwilling to be open enough to make new friends. Until the day she discovers an eerie mist enshrouding a clearing in the forest edging her aunt’s property. She passes through it and encounters Henry, an attractive 18-year-old boy who is nothing like any boy she’s ever known before. He speaks and dresses in an old-fashioned way and treats her with a gallantry that is balm to her emotional wounds. Amy finds herself having feelings for Henry that she never imagined she could after what she went through with Matt. But not only is Henry a very unusual guy, his situation has a fantastical element to it that may keep the two of them from being together long term.

The blurb on the back of this book

is full of spoilers. It basically gives away the main surprise of the book, which involves the fantasy element of the story surrounding Henry’s situation. I will leave it up to the publisher to post that spoiler information from that blurb here as it chooses. I will only say that I agree with the blurb’s statement that this is a “bittersweet romance.” Other than the heroine’s angst over her terrible relationship with her ex-boyfriend, and her struggles to have anything to do with the kids at her new school, three-fourths of the book is her relationship with Henry. If you like romance as I do, that will be a plus for you.

Some people who like a very clear, obvious, happily ever after in the romances they read may have a problem with the ending of the book because, in my opinion, it is a bit too ambiguous. I couldn’t tell from the way it is written if this is intended to be a stand-alone book or if there will be a sequel.

Overall, the author’s writing is excellent, and she employed a writing strategy that I find particularly enjoyable of alternating points of view of Amy and Henry. Amy’s is in first person (“I”) and Henry’s is in third person (“he”). The story is also written in past tense, which I very much appreciate since I find present tense draws annoying attention to itself, distracting from the story.