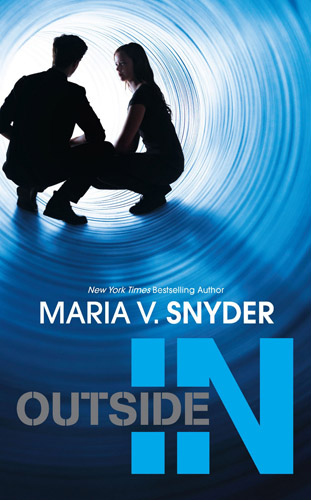 Exciting sequel to Inside Out, a teen, science-fiction, dystopian thriller

Warning: This review is inevitably a spoiler for anyone who has not read book one in this series, Inside Out

. Please read that book before you read this review.

The revolution is over and former scrub, Trella, has no interest in participating in the ruling council she’s been elected to as one of the leaders of the successful rebellion that freed her people from brutal tyranny. The problem is, the council bores and irritates her. Its members can never agree on anything because the council is made up of people from both the previous ruling class called “uppers” and the formerly enslaved “scrubs” who did all the grunt work for the ship.

The bulk of the ship’s population of about 2000 people is made up of former scrubs since the uppers were previously only allowed to have one child per mated pair, but the scrubs weren’t allowed to use birth control. Everyone on the ship is formerly from Earth, and during the recent rebellion Trella and the scrubs, and all but a few of the uppers who were in on the secret, discovered for the first time that their home is a space ship which is on a mysterious voyage heading for an unknown destination that will last for uncounted generations.

What Trella, known as “queen of the pipes,” wants to do instead of wasting her time with the bickering council is to contribute to her people her true skills–climbing through the spaces between walls of the ship. Trella recently discovered relatively vast, untapped reaches of the space ship, and she is anxious to explore and map out their full dimensions so that they can be converted as soon as possible into additional living space. That extra room would mean they could all spread out a bit, most especially the ex-scrubs, who have spent their entire lives until now in crowded barracks in the lower part of the ship, doubling up even on the very beds they sleep in, sharing them in shifts.

Unfortunately for Trella’s plans, though, the council is doing such a bad job of governing that her friends insist that only she can bring everyone together and to do anything but that is a betrayal of all they fought for. The revolution should have ended the stratification of their society, but it hasn’t. Only a handful of the former uppers and scrubs have made any attempt to stop living and working segregated from each other. The bitterly resentful ex-scrubs go on strike, refusing to perform their previous tasks until the ex-uppers do these jobs, too, including raising and preparing food, cleaning and maintenance, washing and repairing clothing, and recycling waste and water.

As Trella struggles to figure out what she can possibly do to fix such a huge problem, the situation suddenly becomes unimaginably worse. There are dangerous explosions in key areas of the ship, wounding and killing numerous people and shutting down vital functions in the ship. Who is doing this? Is it the angry ex-scrubs? Or could it be something else–a threat far more dangerous than the terrible dictators the rebellion took down?

Snyder doesn’t disappoint with this wonderful sequel that fully stands up to the terrific first book in this series. I normally rarely read science fiction, but the world-building in this series is top notch, and the story utterly riveting. Trella is a strong, dynamic, intriguingly complex heroine, and she and all of the secondary characters leap off the page. Even the most peripheral characters feel real, and the villains have fascinatingly layered motivations. Snyder also delivers on something that is especially desirable in teen fiction–but is great in any fiction with an action-based plot–creating a multifaceted band of allies for the protagonist.

In book one, Inside Out, we learned that Trella is a natural loner, an intriguing trait that hasn’t gone away in this sequel. In spite of the fact that spending too much time around people is draining for her, though, Trella is loyal and protective of those she cares about, and she is willing to go to the point of death time and time again to save everyone on the ship. Her relationship with her terrific romantic interest, Riley, grows and evolves in this book

, as does her relationship with her birth mother. In fact, Snyder does a fantastic job of providing growth arcs not just for Trella, but for many of the subcharacters, too. In that regard, there is a brilliant unifying theme in this book that involves a mirroring about-face in a number of Trella’s relationships: People that Trella formerly thought of as enemies begin to function as allies, and some of her former allies begin to look as if they are enemies to Trella, and possibly everyone on the ship.

This book is a great read for older teens–the violence might be a bit too intense for some younger teens–and adults will love it, too. I am among those fans who hope this series will be made into a movie. I can’t wait for the next book in the series.