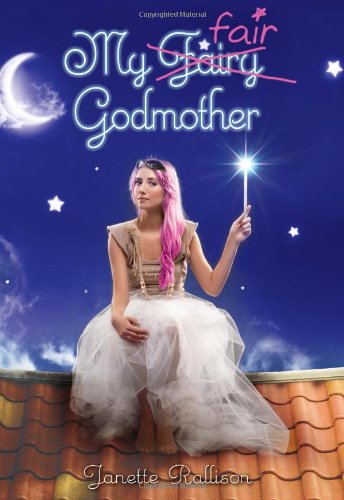 Hilarious, fractured fairytale from the queen of young-adult romantic comedy

Sixteen-year-old Savannah develops a case of serious sibling rivalry when her boyfriend dumps her for her geeky big sister. Soon after, Savannah is fantasizing about how great it would be if her life were like a fairytale, with herself as a princess attending a ball with a handsome prince at her side, when her fairy godmother, Chrysanthemum Everstar, suddenly appears and offers Savannah wishes. Savannah is thrilled at this amazing, magical opportunity, but she nevertheless exercises caution while making her wishes so that nothing will go wrong. Unfortunately, Chrissy is not a full-fledged godmother—hence the moniker, “fair” godmother. Her incompetence lands Savannah in a series of wild adventures within multiple fairy tales, including Cinderella, Snow White, and the Middle Ages in general. Along the way Savannah discovers a romantic interest she would never have considered in her own era, when Chrissy tosses Tristan, a boy from Savannah’s class, into fairytale land with Savannah.

I am a huge fan of Janette Rallison. I’ve read everything she’s ever written, and many of her books several times. In my humble opinion, nobody does YA romantic comedy better than her. Normally Rallison does not include fantasy elements in her contemporary romantic comedies, but her venture into fairytale retelling in My Fair Godmother

is extremely well done. Chrissy is a wonderful antagonist, a colorfully slapdash fashionista who can’t be bothered to thoroughly listen to Savannah’s wishes. As a result, Chrissy fulfills them in the worst possible way for Savannah as the wacky godmother abruptly flings Savannah and Tristan into arduous situations, which are conveyed by the author in laugh-out-loud scenes of comic mayhem.

Rallison’s stories are always character-centered. She excels at creating compelling growth arcs for her protagonists, believably moving her heroines from an initial perspective that is endearingly passionate and determined—but drolly skewed in its view of life and relationships—toward a hard-earned appreciation of a bigger picture of life by the end of her stories. This is especially true in the heroines’ attitude toward the boys they collide with in Rallison’s rollicking romance plots. That approach is terrifically in evidence in My Fair Godmother

Another theme that Rallison deals with in many of her YA novels—and which she also does really well—is sisterly competition. It is definitely on display here in Savannah’s humorously troubled relationship with her sister.

Finally, if you’d like a break from the “gritty” and “edgy” fiction dominating the YA market these days, Rallison is just the ticket. You can always count on her YA novels, including this one, to provide a G-rated story suitable for all ages, but which is sophisticated enough in its execution to hold the attention of older teens and adults, as well. This novel, in particular, is filled with enthralling action without resorting to overt violence, in-your-face sexuality, swearing, or wild parties with drugs, alcohol, and smoking.