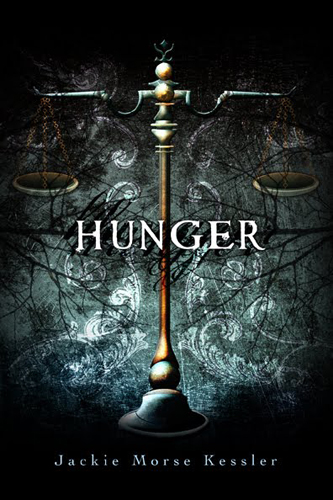 A somber exploration of teenage anorexia

Hunger (Riders of the Apocalypse #1) by Jackie Morse Kessler

An anorexic teenage girl, Lisabeth Lewis, is forcibly appointed by Death himself to the role of Famine, one of the Four Horsemen of the Apocalypse, on the night she attempts to commit suicide by overdosing on her mother’s depression medication.

alternates between two realities: a gritty, detailed examination of Lisa’s daily struggle with depression and anorexia (including unflinching portrayals of vomiting, constipation, and other painful bathroom experiences), and Lisa’s fantastical journey as the transmitter of mass death to the world through famine. As the two sides of her existence collide, Lisa learns by direct, horrifying experience the difference between the parallel forms of starvation highlighted in this book: the externally-imposed starvation of countless, poor, powerless people, and Lisa’s self-inflicted starvation, rooted in the harsh criticisms of her perfectionistic mother.

This book contains elements of popular fiction, whose emphasis is on vigorously entertaining the audience by means of the protagonist facing numerous, strong external obstacles, and literary fiction, whose focus is on a significant social message embedded in the protagonist’s hellish psychological struggles. It is possible this mix of genres occurs within this book because the author decided to take a somber, lit fic approach to her story, but since she normally writes humorous, sexy, pop-fic urban fantasy (the Hell on Earth series, including Hell’s Belles

, The Road To Hell

), her normal voice sometimes peeked through. Personally, I would have loved to see that natural irreverent style completely overtake the book, especially in the way she uses point of view.

In the Hell series, the personality of the upbeat, witty succubus heroine, Jazebel, leaps off the page via first-person point of view. In contrast, Hunger is written in a clinically distant, omniscient-narrator point of view most of the time, with occasional more intimate dives into Lisa’s unremittingly dark thoughts which are quite repetitive due to the obsessive-compulsive-disorder (OCD) component of her mental illness. Though Lisa is suffering from OCD and suicidal depression, it is not beyond the realms of possibility that a character in that position could still be capable of the “grace under fire” type of dark humor to liven up the story a bit. But there is none of that here. What little humor there is, in the form of an occasional snarky quip from Death, is actually rather jarring, because it is so out of step with the harshly hopeless tone of the rest of the book.

On the other hand, if you are a reader who does not like humor, and who enjoys stories with unrelieved misery, what I’m wishing for would probably appall you, and the actual presentation and tone of the book will be nothing but a plus for you. If you are a parent or teacher who loves books with a “message,” or simply wants to inform or educate teenagers in your life about the dangers of eating disorders, then you will probably enjoy and approve of this book and urge every teen girl you know to read it, because it does a good job of showing what anorexia looks and feels like (though the handling of a potential resolution for it is rather over-optimistic and simplified).

If you are a fan of lit fic, you probably won’t like the ending but might like the rest of the book, other than the fact that the language might not be lush enough for you. If you are a person who likes both lit fic and pop fic and are looking for something new and different to read and enjoy mash-ups of different genres, you might appreciate this book. If you like a long, deep read with characters fully developed and story lines carried through to the max, you might be disappointed that this book is so short–though, to be fair, this is only the beginning of a series of four books based on four different teenage girls being forced, one at a time, to take over the role of one of the Four Horsemen of the Apocalypse. We probably won’t get any more of Lisa, but the fantasy world will, presumably, be increasingly fleshed out as the series progresses.