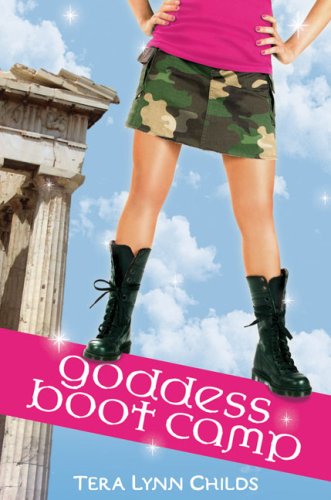 Fun sequel to Oh.My.Gods, a YA chick lit, contemporary fantasy

In the further adventures of eighteen-year-old Phoebe Castro, close descendant of the Greek goddess Nike, Phoebe is struggling to control her recently discovered, very strong, and randomly triggered powers. If she doesn’t get them under control soon, she is terrified the Olympian gods will smite her as they did her father. To help her pass an upcoming trial by the gods in only a few weeks, her stepfather sends Phoebe to Goddess Boot Camp. But Phoebe discovers it is run by her aggravating stepsister and her boyfriend Griffin’s ex-girlfriend, a fellow goddess who can’t seem to get the message that she’s no longer with Griffin. Worse, all the other attendees are only ten years old!

This is a real treat for anyone who enjoys young adult contemporary-fantasy novels with a big dose of comedy. The romantic plot isn’t quite as strong in this book as in the first book in this duology, Oh. My. Gods., because Phoebe is now in a relationship with a boyfriend who loves her–though the author does put in some roadblocks to their romance. Mainly the story focuses on Phoebe’s experiences in getting her powers under control, which produces many wacky situations.

Fans of the first book in this series

will be delighted to discover this cute sequel–I certainly was! This book is predominantly geared toward us. While it is possible that readers who haven’t read OMG might enjoy this book anyway, their experience would be greatly enhanced by reading OMG first.