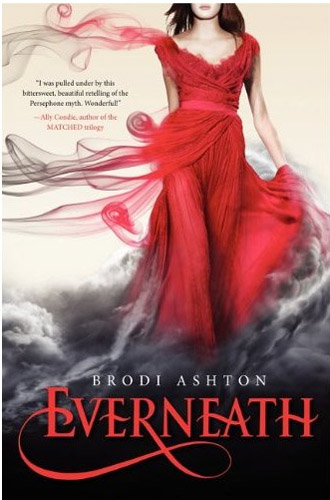 First book in a new YA, paranormal-romance trilogy

In the Prologue of this book, we learn that teenager Nikki Beckett has just spent 100 years of Everneath time physically bound to a spiritual vampire called Cole who fed off her energy all that time in order to provide himself with immortality. Almost all teen girls who are subjected to the Feed don’t survive, and because Nikki does–not even aging–Cole wants her to be his queen and rule with him in the underworld of Everneath and become an Everliving like him. Unfortunately for his goal, Nikki has not forgotten her real love, a boy named Jack whom she has known since she was 11 and he was 12. Because she wants to return to Jack, Nikki is sucked back to the surface of earth, into the real world, but only for six months.

We soon learn that Nikki has only been gone six months of human time. She looks so thin and drawn that everyone assumes she ran away and was on some kind of drug or alcohol bender the whole time. It is very difficult for Nikki to get back into her old life, because those 100 years of Everneath trauma stole a lot of her humanity, most especially the ability to feel emotions. And reconnecting with the real world is made even more difficult by the fact that she is just there to engage in a long good-bye.

This story utilizes two very popular premises for the YA market: a love triangle and a version of immortality that involves a fantasy element very similar to vampirism–only this time sucking energy rather than blood. The author has employed some other new twists to these beloved themes: she uses a mixture of Greek and Egyptian mythology for her world-building, and rather than the heroine choosing between two potential lovers who are both supernatural, one of them is human.

I enjoyed the fact that this book is told with two points of view, Nikki’s and that of Jack, her human love interest. I also appreciate very much that the book is written in third-person, past tense rather than first-person, present tense, which is most common in YA. That’s another excellent breakaway from the norm that many might find a refreshing difference. The author’s writing, in general, is also very readable and well done.

Fans of paranormal romance rooted in love triangles will very likely enjoy this book very much. This is the first book in a trilogy, and the author does a good job of drawing the first book to a definite conclusion–rather than offering an annoying cliffhanger–while at the same time setting up a huge story question to drive the next installment.