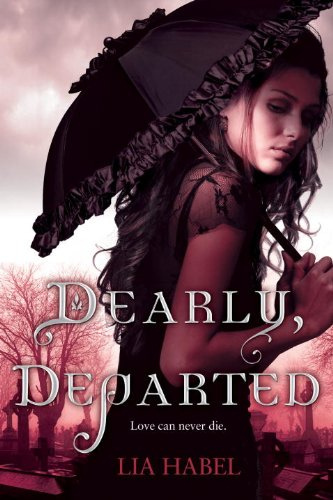 Dearly, Departed (Gone With the Respiration, #1) by Lia Habel

Dearly Departed is Book 1 in a new dystopian trilogy, pitched by the publisher as “steampunk romance meets zombie thriller.” The publishers also bill this book as a story of “star-crossed lovers,” which it certainly is. You don’t get a much bigger romantic conflict than that the male lead is suffering from “the Laz,” a disease that is slowly turning him into a zombie, one of the “walking dead.” I myself view this book as “Beauty and the Beast” meets steampunk meets zombie apocalypse.

This story takes place in 2195. A hundred and fifty years prior, the Americas endured a civilization-crushing convergence of man-made and natural disasters, including plagues, volcanic eruptions, rising seas and a civil war in the U.S. in which both sides nuked each other. The small fraction of survivors in North and Central America surged as displaced refugees far into South America and warred with its inhabitants for control of their land and natural resources. Years later, the victors, many of whom were presumably native speakers of Spanish and Portugese, decided along with their English-speaking compatriots that the most desirable society to form out of the rubble of a destroyed world would be an English-speaking one that reinstated the customs of Victorian England of the late nineteenth century, including hot, cumbersome clothing worn in a tropical climate and a highly stratified social order. They chose to emulate this time and place in history because they admired its “conservative” values–with the notable exceptions that lesbianism (and presumably male homosexuality) were not frowned upon, and little girls were allowed to play, unchaperoned, with little boys who were not members of their family.

When the story opens, a group of rebels called Punks have been engaged for some time in insurrection against the very fabric of Nora’s society. They are repulsed by its combination of advanced technology with a backward trip into the enforced social inequality of a caste system that was wiped out hundreds of years ago in the Americas. The Punks have qualities of the rebels of the French, American and Russian Bolshevik Revolutions of the historical past, but they also have similarities to guerilla warriors of our current real-world era in their use of improvised explosive devices (IED’s).

Unlike the dystopian The Hunger Games

, and essentially every YA dystopian I’ve read so far, this story is not told from the perspective of one of the downtrodden of society, but from the point of view of Nora, a teenage girl who is part of the privileged elites. Several things mitigate the potential unsympathetic nature of this choice: Nora is an orphan living with her aunt, with precarious family finances, and she is a strong, determined heroine that fans of Katniss from Hunger Games can root for. From earliest childhood Nora has been known for her stubbornness, her first word being, “No.” She has been trained by her father to shoot extremely well and to physically defend herself. She states that if girls in her culture were not forbidden to enter the military, she would have wanted to join the army. These abilities serve her well on the night that her home is attacked by a horde of bloodthirsty zombies and the major action of this novel begins.

For fans of steampunk, Nora’s world fully satisfies that genre’s central convention of the intermingling of advanced and antiquated technology. For example, there are both electricity and gas lamps; the heroine carries a parasol in a complex underground community where there is neither natural sunlight nor rain to be shielded from; though email is available, Nora’s aunt chooses to send snail mail letters and people use calling cards when they make social visits.

I’m not normally a fan of zombies because I’m a fairly squeamish reader. I’m also not a particular fan of steampunk. However, this author has so many literary strengths, including active, sympathetic protagonists, dynamic plotting with plenty of enthralling conflict, and excellent, basic writing and editing skills, that she won me over to enjoying her zombie story in spite of myself.