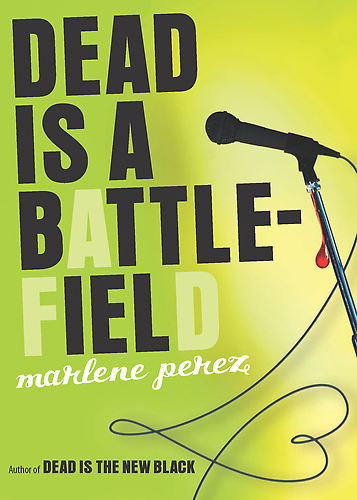 Book 1 in a new paranormal, mystery series for young teens

Dead Is a Battlefield (Dead Is, #6) by Marlene Perez

I’m a big fan of Marlene Perez’s Nightshade novels, a humorous, paranormal, mystery series for young adults. The first five books center on Daisy Giordano, a magically gifted teenager who lives in Nightshade, a quirky little town filled with many other magical residents besides Daisy. When this book was released I excitedly assumed that it would be another Daisy book. I was initially disappointed when I discovered this book centers on a brand new heroine, 14-year-old Jessica Walsh, and Daisy is not even in it, other than a few mentions as someone Jessica only knows on sight. However, some familiar faces are in the story, such as Circe Silvertongue and Flo and her invisible brother from the town’s diner, and Jessica herself soon won me over.

Jessica is just beginning her freshman year at Nightshade High School. She’s a spunky girl and the author has presented her very believably as a young teenager. I would assume that, if this series has five books as the Daisy series did, that we will experience Jessica as she progresses through high school until, like Daisy, she is about to begin college.

Since this is a paranormal series, and teen novels all have to varying degrees the theme of “coming of age,” naturally enough in this first book in the series Jessica has a magical coming of age as she discovers that she is a “Virago,” a warrior protector whose mission is to guard the residents of Nightshade. Viragos are warned of impending danger by a special mark that looks like a tattoo. Jessica and a team of other teen Viragos come together to attempt to solve a mystery of why many of the girls at Jessica’s school have become devoted to a new boy at school, to the point of obsession and outbreaks of violence. And on a personal level, Jessica is particularly worried because one of these girls is her best friend.

The main plot of this story is the mystery, but as in the Daisy series, there is a romantic subplot and, I am happy to report, there is no love triangle! Instead, Jessica has one highly sympathetic love interest, Dominic Gray, the cute-but-moody lead singer for a local band called Side Effects May Vary.

This book is clearly targeted at teens age 12-14, but it provides such innocent, harmless reading fun that children as young as 9-10 who are strong readers could safely enjoy it as well. Perez is a talented writer who has created a fascinating magical world in the community of Nightshade. The next book in the series will release soon, and I am greatly anticipating reading it.