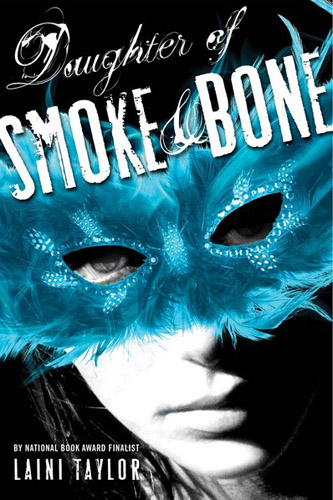 Karou is an azure-haired, 17-year-old attending art school in the ancient Czech city of Prague. Her talent alone sets her apart from the other students, but it is the air of mystery about the lovely girl that fascinates. No one, not even her best friend, really knows her. They can’t, because the truth is too fantastic for them to accept, even if she were free to talk to them about it, which she is not.

Karou lives a double life. Though she has passed for many years as a human among other humans–even taking a human lover and feeling the same type of anger and betrayal any human girl would experience on finding out he has cheated on her–she is not like other humans. Karou lives another life that she can only reveal to her human friends through her art–which they think is pure imagination. Karou was raised by odd beings who look like they are a mixture of human and animal parts. We are led to presume, from the opening of the book (more on that in a moment), that they are “demons,” so I will call them that to avoid any spoiler beyond the author’s own.

These beings would be terrifying to any ordinary human, but Karou has known them all her life, and to her they are simply family who have protected her, cared for her, and in their own way loved her. In fact, the only thing they do that is strange to the point of being grotesque is a mysterious traffic in teeth by the head demon, Brimstone. He collects all kinds of teeth, not just animal teeth, but human teeth, too, and he is not particular whether they come from the living or dead. Most of the individuals selling the teeth are the scum of the earth (“rank brutes with dead eyes, stinking of the slaughterhouse”), and though many of them want money in exchange for their teeth, others have discovered that Brimstone, whom Karou calls the “Wishmonger,” can also offer wishes in payment, which range from inconsequential to enormous in their power. The trouble with those wishes is that they all too often play out in a way that is more curse than blessing to the one who possesses them.

Laini Taylor is an extremely gifted writer on a number of levels. She uses language in an often stunning way, but it never takes center stage, overpowering her characters and plot. She has also chosen to tell her young-adult, urban-fantasy story in omniscient point of view, which alternates between a distant, all-knowing narrator who sounds like the voiceover of a movie and close-and-personal forays into the heads of various characters. Though this point of view is common for high fantasy, it is rarely used in urban fantasy, and it is also uncommon in young-adult fiction, both of which are written a huge percentage of the time in first-person (“I/me”) point of view. In less skilled hands, this approach might have failed, but in this story it contributes strongly to the forbiddingly mysterious mood. It also gives the author the flexibility of focusing primarily on Karou while also offering the reader fascinating glimpses into the thoughts and motivations of other characters. Most delightfully the thoughts of Karou’s angel-warrior love interest, Akiva, a riveting romantic hero whom Karou does not encounter for the first time until page 77.

This delayed “first meet” is another bold move in a story which is being heavily promoted by the publisher as a dark, YA paranormal romance. But the power, intensity–and uniqueness–of their first meet is worth the wait.

Another brave departure in this story is that the reader is spared the now cliché YA love triangle. We know from the start of the book what there will be only one romantic interest for Karou (her human ex-boyfriend is never in the running) and exactly what the romantic conflict is going to be when the author opens the book with this quote: “Once upon a time, an angel and a devil fell in love. It did not end well.” Even though this is something of a spoiler, letting us know what Karou’s identity must be and that the romantic conflict is of the “Romeo and Juliet” variety, it fits with the fairy-tale tone of the story as a whole.

Overall, in every way that matters, this story is a riveting read. Only the ending, which is a fairly typical cliffhanger format for most YA paranormal series these days, is rather unsatisfying, but not enough to stay away from reading the book until the full series is complete.

Advisory for parents and teachers: This book has frank sexual content, and there is violence that is typical of the genre of urban fantasy. As a result, it is best suited to mature teens age 17 and above.