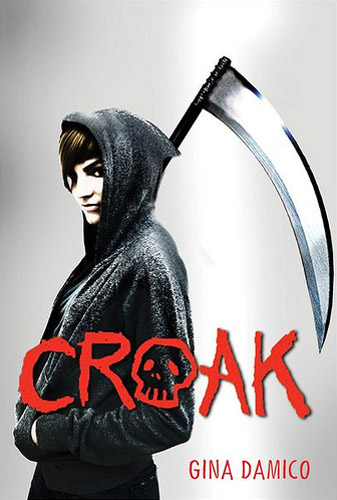 Lex, the 16-year-old protagonist of this story, is very much an anti-hero. She has committed acts of physical assault that would have landed her in prison in contemporary United States, where public school administrators employ draconian “zero tolerance” policies for violence as a means to prevent potential massacres by vengeful teens. In the fantasy world of this book, however, no such consequences occur. Instead, her worried parents merely ship her off to her Uncle Mort, who lives near a small, rural town, and Lex doesn’t even have to be escorted there. While in Mort’s care, Lex discovers that there is a supernatural reason for her rage and violence–she is destined to become a Grim Reaper.

Anyone who is a fan of the paranormal, dark-comedy, Showtime TV show, Dead Like Me

, may either enjoy or resent this book depending on their attitude toward a blatant homage to the show. DLM was clearly aimed at adults, and though this book has been marketed as a “teen” novel, it, too, is very close to being R-rated. This book is not, in my own opinion, quite as funny as DLM, but it is definitely not meant to be taken as drama. A clear example of that is the toning down of the real consequences of the type of violence Lex committed before being shipped away from her family. That downplay acts to take a great deal of harshness out of the dramatic equation of the story. As for the humor itself, it tends to come from two main sources. The first is a sardonic under-reaction to horrific events which encourages the audience to laugh rather than grimace or quake. The second is the use of word play. Examples of the latter include the title itself, “Croak,” which is a slang word for dying, and the Grim Reapers’ living in a town called Grim, with streets like Slain Lane.

The humorous slant is a fortunate one given that this is marketed as a book for teens. If it were written as straight drama, the story would be instantly ratcheted up to the level of some of the darkest of the dark of gritty, adult-themed YA novels on sale today. The reaping of souls is labeled, “killing people,” and the Reapers see themselves as “killers,” which gives them the flavor of assassins rather than the usual connotation of Reapers as detached instruments of a pre-ordained fate. The killing they engage in is onstage in all its grisly detail. The language is often coarse. The heroine has sex with her 18-year-old boyfriend. The Reaper trainees are asked to steal on behalf of the town of Grim. There is use of substances that cause inebriation (though of a “magical” nature rather than the usual booze or drugs found in many teen novels).

None of these things are problems for an audience of teens over the age of 17 and adults, and I am not going to grade down the book for marketing decisions that big publishers are routinely making to ride in the wake of the massive interest in YA generated by Harry Potter

. The current age range for the label of “young adult” is as low as 11 and as high as 21. Publishers are offering no parental guidance whatsoever, so reviewers are left with that task.