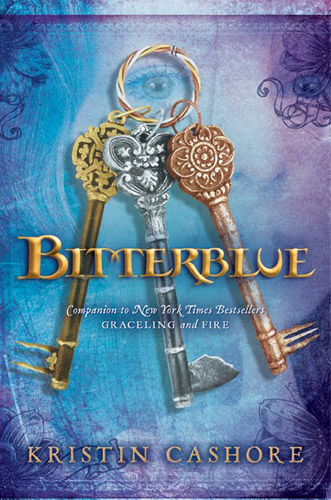 The third book in the Graceling series

This is the story of Bitterblue

, whom we first met in Kristin Cashore’s first novel, Graceling

. It is now eight years after the events of that novel and 18-year-old Bitterblue has been queen all that time, after the death of her father, evil King Leck. The kingdom of Monsea is still struggling to overcome the mind-destroying magic of Bitterblue’s father, and she is burdened with advisers whom she views as clueless. In an important plot point that reminded me of a similar device that I enjoyed very much in A Connecticut Yankee In King Arthur’s Court

, Bitterblue sneaks out of the castle to go out among her people incognito. In the process, she meets two young thieves, Saf and Teddy, who are Robin Hood type figures, stealing not for themselves, but to make right the atrocities perpetrated by Bitterblue’s father.

Unlike the heroines of Cashore’s first two novels, or Bitterblue’s own father, the young queen has no magical powers herself. But we do meet again the two main protagonists of Graceling, Katsa and Po, who provide a magical element. Like Katsa and the heroine of Fire

, Bitterblue has access to herbal birth control and is mistress of her own sexual choices. She is also emotionally confident enough to choose the mate she herself prefers in a medieval-type fantasy world where the vast majority of women don’t get to make those kinds of choices.

It is very original and daring of Cashore to write a series of books occurring within the same fantasy world which are not truly sequential and are not based on the same heroine. Instead, they are mainly tied together by the ways in which evil Leck affects the three different female protagonists. Cashore has also gone out on a limb offering a heroine who is not magical or a strong, assertive warrior in the way that her other two Graceling-world heroines are. A heroine like that is something that most readers have come to expect from Cashore, as well as much more action than occurs in this book. It would also be hard to top the “meet cute” between Katsa and Po, which is one of the most amazing romantic collisions I’ve read anywhere, anytime. But even though the author did not choose to replicate those kinds of story triumphs in this book, I still consider this book well worth reading because no matter what approach she takes to a given story, Cashore is an excellent writer with fascinating characters, conflicts and fantasy world-building.