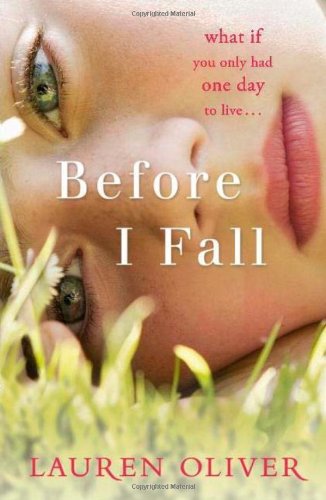 Before I Fall by Lauren Oliver

This book has what is known in the publishing world as a “high concept”: the heroine, Samantha, dies in a car accident within the first few pages of the book, then comes mystically back to life and lives the day of her death over and over again. Fantasy is very “hot” right now, and anyone casually reading about that concept might naturally assume that this book is popular fiction, specifically, a contemporary fantasy with mystery, adventure and lots of instances of overt magic throughout the book. I myself was drawn to reading the book because of that fantasy concept because, like many other people, I love Groundhog Day. I knew from reviews I’d read that this is not a comedy, but I assumed this might be a dramatic version of that comedic movie.
It is not.

It became clear to me after reading less than ten pages that this is not popular fiction–it is literary fiction. A hint of this was there all the time that I only picked up on after the fact: the author prominently mentions in her bio on this product page that she has an MFA from prestigious New York University. The reason I’m bringing up the genre of this book is this: I believe it’s important in doing a review of a book to not judge it as failing for not doing things its author never intended. That is, I don’t want to condemn an apple for not being a good orange.

For those who have not had this information drilled into you by one or more high school, college or university English instructors (I plead guilty to teaching English at all three of these types of institutions), literary fiction places a central focus on two distinct things that are usually only sidelines in popular fiction, or not there at all: the style of the writing, that is, the beauty of the words on the page, and the complex, dark psyches of the protagonist and the characters she interacts with. Unlike the heroes of pop fic, lit fic protagonists generally have no driving “story goal,” that is, an intense desire for something in the external, physical world that the protagonist will stop at nothing to achieve. The lack of a strong goal means there is no dramatic requirement for the counterbalance of a strong, external antagonist to stand in the protagonist’s way. In particular, there’s no need for the type of evil villains that are common in pop fic, contemporary fantasy novels. In lit fic, the conflict tends to be internal–the protagonist struggles with two competing sides of herself, the person she’s always been, and a new version of herself arising from (usually) the ashes of her present terrible (or at the least dreary and depressing) circumstances. The ending doesn’t have to be tragic, but more often than not it is, in the sense that there is often a sense of inevitability about the protagonist’s ultimate inability to escape her dark fate.

Having made that very simple, over-generalized statement of what lit fic tries to do, I can rate this book on each of these three aspects:

I graded down the ending because I struggled with the way it is constructed. In order to avoid this being a major spoiler, I’ll be as nonspecific as I can about the details.
In my opinion, the “rules” of the magic in the story as they apply to Sam are not consistently applied to the most crucial counterbalancing character in the plot, Juliet. Sam’s “inevitable” fate arises out of her story journey to become a better, more moral person. Not so with Juliet. The author allows the story’s magic to provide Juliet with a resolution that involves a change in her physical state that the author does not permit to Sam–and the logic for this choice is not at all clear to me. There are many other ways than the one the author has chosen for Sam to make a moral “sacrifice” which demonstrates symbolically how much she’s changed due to her story journey. I believe the ending would have been both artistically and emotionally far more satisfying if Juliet and Sam were allowed to have outcomes that involved a consistent application of the magical force propelling the story.
Another aspect of the ending that bothers me because it seems to me to be contradictory to the tenor of the rest of the book as a lit fic novel, as described above, is this: After slogging for multiple, difficult days to achieve a core change in her own psyche, Sam simplistically concludes that all the other characters close to her in this story will be just fine in their future lives. That is, that they will rise to a higher moral plane, from their present casually vicious state, without any of the brutal emotional struggle Sam endured to achieve that evolution herself. I’m not sure if the author has included this in order to satisfy to some extent those in her audience who might be hoping for a traditional pop fic “happily ever after” ending. But for me, in the context of the focus of this book, it rings false. Nothing in the story as it is constructed leads me to believe that, in particular, the key negative force in Sam’s life, her bullying, “bitch” friend Lindsay, will eventually grow and become a better person given the current trajectory of her life.