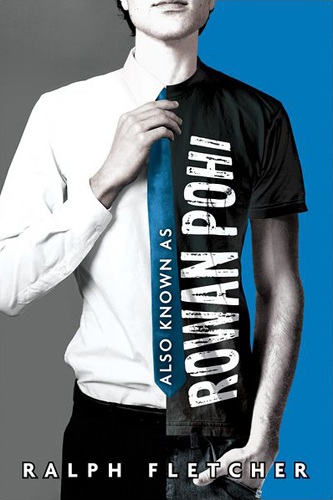 Enjoyable YA aimed at teen boys who are reluctant readers

Fifteen-year-old Bobby Steele and his best friends, Big Poobs and Marcus, are students at the dreary, underfunded, local secondary school, Riverview High. They regularly hang out at the local IHOP, a restaurant where teens from the ritzy private school Whitestone Prep–AKA “Stonys”–can also be found. One day out of boredom, Bobby and his friends decide to create a fake boy and fill out an application for him for Whitestone. They name him Rowan and choose the last name “Pohi,” which is IHOP spelled backward.

The three of them are amazed and rather intimidated when their application is actually approved, and they mutually agree that the joke has gone far enough. Big Poobs and Marcus immediately move on, but everything Bobby has ever wanted is at Whitestone, and it becomes a temptation he can’t resist to pass himself off as Rowan Pohi.

I liked Bobby very much. He is a sweet guy, forgiving of his mother, who deserted their family because his father physically abused her, and tolerant of his father, who is working hard to make restitution to his family for what he did. Bobby is very protective and caring of his five-year-old brother, who is an endearing child.

The tone of the story is wistful and sad for the most of the book. I was strongly rooting for things to turn out well for Bobby, who is a very talented runner, an excellent writer, and has exceptional social skills along with being blessed with good looks. He is the kind of boy who, if he can get a good education, can go very far in life.

There is an interesting love triangle in the book with Bobby drawn to a rich, beautiful girl as well as a smart but average-looking girl who is of his same social class.

Without being preachy, the story makes topical references to recent drastic cuts in funding to public schools and how enormously greater are the opportunities in life for young people who are able to attend good schools. The relationship of Bobby to his friends rather reminds me of the movie Good Will Hunting

, though this story is much less complex.

This is a fast and easy read that reluctant readers would enjoy. It is good to see a male protagonist in YA. The cover is something that might appeal to boys such that they would not feel embarrassed to be caught reading the book.

Other than one non-explicit make-out session, the book is entirely PG and suitable for teens 12-15. And even in that one scene, Rowan’s attitude is romantic rather than purely lustful. He’s a good boy–but not a boring boy.