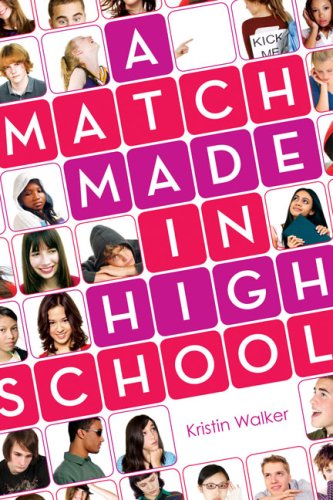 A Match Made in High School by Kristin Walker

Seventeen-year-old Fiona, along with all the other seniors of East Columbus High School, is outraged when the principle and guidance counselor announce that their participation in a new marriage-education class is mandatory for graduation. Each senior is paired up with a fake marriage partner not of their choosing for the entire school year. They are forced to earn money together, do a budget, participate in a social activity, figure out together how to solve randomly assigned life problems, and meet weekly for marriage counseling with the guidance counselor. Fiona’s best friend Marcie doesn’t come off too badly. She’s paired with the music-mad Johnny Mercer who is a gentle giant and extremely funny. No such luck for Fiona. Not only didn’t she get paired with the one guy that would have made this whole exercise worth doing, her long-time, unrequited crush, Gabe, but to add insult on injury, Gabe is placed with Fiona’s biggest enemy. Amanda is a beautiful, arrogant cheerleader who’s been calling Fiona Princess Pee Pants ever since she wet her pants in public in second grade. And to make matters as bad as possible, Fiona is matched with Amanda’s jock boyfriend, Todd, who plays pranks on Fiona that make Amanda’s taunts over the years look like friendly hugs. But Fiona doesn’t take Todd’s inciting actions lying down. She pranks him right back, and the war is on.

This book is repeatedly laugh-out-loud funny. Fiona is a strong, determined heroine, and her sparring with Todd is hilarious. In the midst of the humor, though, is a compelling coming-of-age story line as Fiona learns, through her travails with the marriage-education course, a great deal about her friends, her enemies, and herself that she never realized before.

This is Kristin Walker’s debut novel, and I can’t wait to see what she comes up with next! For those who enjoy this book, I recommend several other YA romantic comedies, including The Oracle of Dating

and Top Ten Uses for an Unworn Prom Dress.