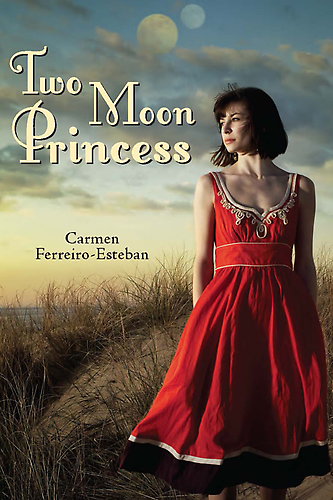 YA parallel universe fantasy with a strong heroine

Princess Andrea lives in the medieval-style kingdom of Xaren, which
exists in a world parallel to our contemporary United States. Andrea
strongly resents the limitations of her life as a young, sheltered royal
whose only prospects for the future are to endure a political marriage.
Her dream is to train as a warrior as princes do, but instead she is
forced to study boring court etiquette with her older sisters. This
tedious regimen is more than Andrea can bear. In a fit of rebellion, she
runs away and enters a forbidden portion of the kingdom that is rumored
to be haunted. In the process, she almost falls over a cliff and is
unexpectedly rescued by an uncle who is the family eccentric. He
admonishes her to stay away from this dangerous place, but Andrea can’t
make herself obey. During another risky, exploratory journey there, she
ends up in a cave just as the tide is coming in and almost drowns. Her
relief at surviving is short-lived, though, because she discovers to her
dismay that she has been swept into an utterly foreign world which has
only one moon instead of the two moons of her own world.

Princess
Andrea’s unwillingness to settle for a very limited life leads her to
fantastic adventures that are highly entertaining. Andrea is a strong
protagonist who never gives up. There is action, romance, mystery, and
amusing moments of comic relief in this delightfully original novel, as
Andrea attempts to fulfill her heart’s desire in the two separate worlds
she becomes equally attached to.