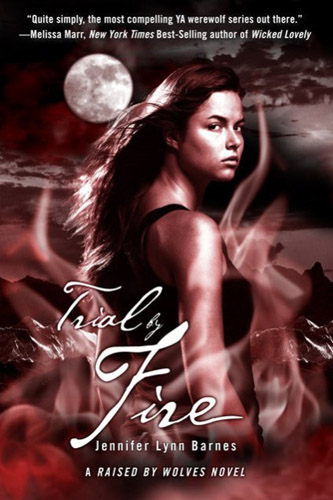 A stellar second installment in the “Raised by Wolves” young-adult, urban-fantasy series

The story begins not long after where the first book in this series, Raised by Wolves, ended. If you have not read that book, please do not read this review as it contains spoilers for that book.

Sixteen-year-old Bryn has settled in as the human, but preternaturally resilient alpha of her small pack of werewolves, ranging in age from toddlers to teenagers. Bryn’s three closest friends and most stalwart supporters are still in the pack. First is Chase, a resilient like Bryn who was turned into a werewolf by the bite of a rabid were (the villain of Book 1) and is her love interest. Next is Devon, a gorgeous, quirky metrosexual who loves show tunes. He is her second-in-command and is destined to be an alpha himself someday as a pure were born of two weres–unlike most weres who are born of human mothers because were females are extremely rare (they only survive in the womb when they are part of a pair of fraternal twins). Devon has been Bryn’s best friend since she was eight and first came to live with weres. Third is Lake, one of those extremely rare were females. She is Bryn’s age, is in love with weapons of all kinds, and is highly desired as a potential mate by every grown were within several states.

The major conflict of the story begins when a 14-year-old were male who has been brutally tortured by a coven of psychics begs Bryn to take him in and keep him safe from his own alpha–Devon’s evil older brother Shay–who gave him to the vicious psychics. Bryn is put in the terrible dilemma of wanting to protect a vulnerable boy, but at the same time faced with the possibility of a devastating were war if she violates the rules of the werewolf Senate. No alpha can steal a pack member from any other alpha, not even if that alpha is wrongly harming a vulnerable member of his pack. These rules seem cruel, but they serve to stave off even worse situations of alphas invading the territory of other alphas and staring inter-pack wars. Shay knows these rules, and he is trying to find a way around them, because he wants nothing more than to destroy Bryn and steal all the young females in her pack, most especially Lake, whom he wants for himself.

Bryn is protective and compassionate and when she is put between the rock and a hard place of Shay and the coven of evil psychics, she has no choice but to find a way to fight harder, rather than smarter against her enemies, because she and her very young pack are horribly outmatched.

I loved this book every bit as much as Book 1. I raced through the pages. Barnes is a master at urban fantasy. She fulfills in spades its prime directive of a powerful, noble Warrior who gets into trouble because of her protective instincts. She also provides compelling fantasy world-building, truly evil villains and tons of action. And on top of all that she offers what most adult urban fantasy too often fails to present–a marvelous family of affiliation of close friends and allies, and a lovely, warm romantic subplot with Chase. Her writing itself is also terrific, smooth, readable and often unobtrusively lyrical. I cannot wait for the next installment.