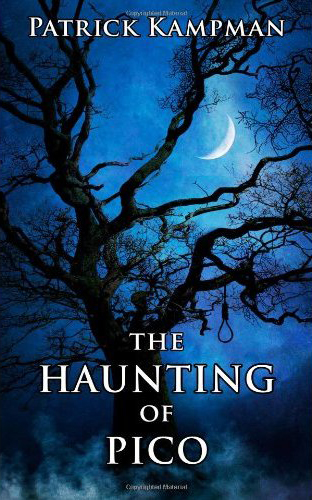 The Haunting of Pico by Patrick Kampman

Fifteen-year-old Chris and his beautiful, fourteen-year-old sister Eve are quite unhappy when their parents decide to move from laid-back urban life in California to the small town of Pico in Texas. Chris and Eve are non-biological siblings who were separately adopted by their parents from Korea, and at first Chris is worried that his Asian heritage will lead to prejudice against him and Eve in Pico. Fortunately, that does not happen, but he soon discovers that he has far greater problems than his social life. His parents have unknowingly purchased an old house for Chris’s family that has been haunted for over 60 years by a previous owner of the house who was murdered on the property. The rage-filled ghost poses a serious threat to Chris and his sister, and he is determined to solve the mystery of what is holding the ghost to this world in order to send it on its way.

Both teens and adults who enjoy a paranormal mystery with a strong climax will be pleased with this story. It is also suitable for boys as much as girls, because it has a strong male protagonist, something that is much too infrequent in YA fiction. Chris is a sympathetic, compelling hero, and the coterie of friends he draws to himself are quite entertaining, as well.

While this novel has some excellent comic repartee scattered throughout, I would label the story primarily drama. And at certain moments it moves from mystery into suspense or downright thriller because of some truly creepy villains who crank up the action. (Note: I myself am not a fan of horror, and anyone who loves horror may not find this novel particularly scary. But for readers such as myself who don’t read horror or can’t stomach extreme violence, this story is plenty frightening, particularly in the ultimate resolution of the main plot.)

For fans of romantic triangles in YA, there is a quite unusual and interesting one in this book for you to enjoy.

For those concerned about the age appropriateness of this story: There are a few sexual situations (though discretely handled), a bit of underage drinking, and several scenes of strong violence. Because of these things, some parents may consider this story more appropriate for teens 16 and above.