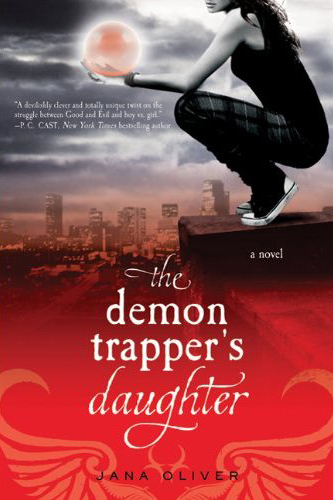 Riley is an apprentice demon trapper who lives in an alternative Atlanta of 2018 in which the fabric of society has been torn apart by severe economic upheavals. As if that weren’t awful enough, the world has also been invaded by demons.

Riley’s mother is dead, and her father is a demon trapper saddled with bills and in an extremely dangerous profession. Riley is determined to be a demon trapper, too, and her father has reluctantly agreed to help her train as one. But when her father tragically dies leaving her an orphan, Riley’s already difficult life is completely torn apart. She is forced to rely on Beck, a former apprentice of her father’s. Unfortunately, she has bitterly resented Beck every since he rebuffed the adolescent crush she had on him in the past because of the age difference between them.

There are two protagonists in this paranormal, dystopian thriller set in a mythical 2018. Riley, a teenage girl, and Beck, a young man in his 20’s. This setup is similar to that of another recent, adult urban fantasy marketed as a young-adult novel, Hold Me Closer, Necromancer

. The latter is told from the points of view of a twenty-something hero, an eighteen-year-old heroine, and a middle-aged villain. The content of both of these books is extremely dark and “gritty” (to use a term that publishers are fond of employing for adult novels published under the label of “young adult”). There is a great deal of violence in this book and sexual situations that are adult in nature, such as references to sexual violence, mentions of sex toys, and soliciting a minor.

As an urban fantasy in general, the world-building is well done. There is a lot of action, which is always good. The heroine is passionate and driven. The co-protagonist Beck is sympathetic, and there are lots of scary villains. In short, all of the ingredients for excellent urban fantasy are there. The ending is also well done with enough loose ends to draw readers forward into a planned series of books, probably a trilogy

All in all, a read that fans of urban fantasy will very likely enjoy, but many parents may not consider it an appropriate read for teens younger than 16 or 17.