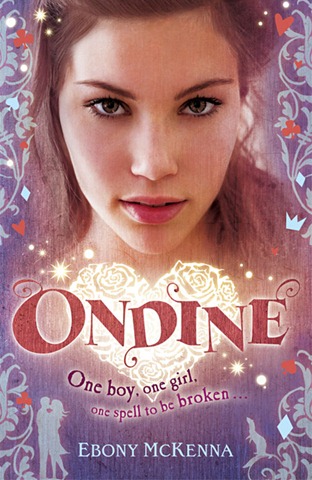 Fifteen-year-old Ondine de Groot lives at her family’s business, a combination hotel and pub in the imaginary Eastern European country of Brugel. Ondine has worked for years alongside her mother, father and two older sisters cleaning rooms, serving customers and scrubbing dirty dishes. But at the start of the story her mother has sent her to the other side of Brugel to Psychic Summercamp for several weeks in order to develop her extra-sensory skills. Though these are accepted as a normal and desirable part of life in Brugel, Ondine doesn’t believe she has any such talents, in spite of her mother’s insistence that Ondine must be psychic because it runs in the family. Bored and homesick after only a week at camp, Ondine decides to sneak out of camp and run away to her home. Her only hesitation before leaving is what to do with Shambles. He’s an adorable ferret who showed up not long before, “face-deep in her secret stash of Brugelwurst sausage,” and he’s been following her like a lap dog ever since. He’s so attached to Ondine, in fact, she feels guilty about leaving him behind. She’s convinced her mother wouldn’t want a ferret at their hotel, so she tells herself if she brings Shambles along, she can find him a good home with someone else. In the midst of her trip home, though, Shambles suddenly begins talking to her in a thick Scottish accent, and Ondine wonders if she’s gone crazy. Shambles assures her she hasn’t. He can talk because he used to be a Scottish laird named Hamish until he angered a witch. She put a spell on him that changed him into a ferret and has also preserved him, in a non-aging state, for scores of years. And thus begins the hilarious adventures of Ondine’s “Summer of Shambles.”

The structure of this book is quite original. The author has written it in a fairy-tale, omniscient voice with a witty, intrusive narrator who reminds me of a combination of the narrator in Jane Austen’s Pride And Prejudice and the voiceover narrator of the classic movie, A Christmas Story. Ondine is an appealing character, producing many very amusing moments as she is tugged in multiple directions by the demands of her various family members, but most of all by the antics of Shambles/Hamish. Ondine’s quirky relatives are a big part of the fun, especially her mother, and the villain is very well suited to a fairy tale. But of all the great characters in this book, Shambles/Hamish steals the show. He is outrageously outspoken, and a hilarious mixture of man and ferret in his living habits. His eternal pursuit of sausage is one of the cutest plot devices for getting Shambles in trouble throughout the book, and his distinctive take on life expressed in a steady stream of Scottish colloquial expressions had me constantly chuckling. Finally, like all good romantic comedies, this book has a satisfying, upbeat ending.