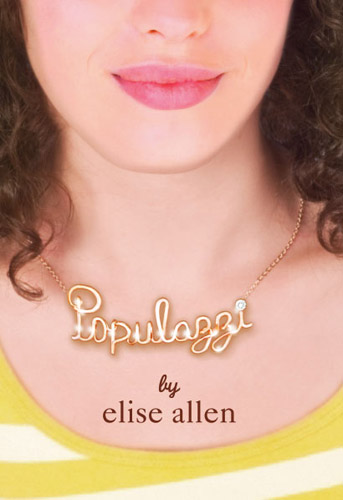 Sixteen-year-old Cara Leonard and her best friend, Claudia, have always longed to be part of the most popular clique in high school, the Populazzi, the polished, charismatic, gorgeous teenagers at the top of what Claudia calls the “Popularity Tower.” But the Populazzi are as out of reach to Cara and Claudia as the stars since they became consigned to the lower reaches of the Tower forever from the day that Cara involuntarily wet her pants in kindergarten and Claudia voluntarily joined her by wetting hers, too. It was an act of solidarity that was social suicide for Claudia, but cemented a deep and lasting friendship extremely important to both girls.

Over the years, the two friends have worked out an entire system of classification for the tiers of the Popularity Tower, the social classes prevailing in high school. The “Happy Hopeless” are the “very basement of the Popularity Tower” who “are so socially out of it, they don’t even know the Tower exists.” The next level up are the “Cubby Crew.” They are “not all created equal.” Though “some barely rank above the Happy Hopeless,” there are others who “are only that little bit of cachet away from being Popularazzi.” Since kindergarten, Cara and Claudia have been “lower-echelon Cubby Crew.” There are many different types of Cubby Crew, including the “Theater Geeks” (self-explanatory), the “Cosmopolitans” (kids who smoke, drink lattes and wear avant-garde clothing), and the “Wasteoids” (androgynous dopers), as well as various unnamed duos, trios and quads—such as Claudia and Cara have been—who are “islands unto themselves.”

The tier above the Cubby Crew are the “DangerZones,” who are “dark, troubled and fascinating.” They don’t care about labels like “popular” and go their own way, but because they are coolly indifferent and morose—unlike the Happy Hopeless—teenagers on every Tower tier “feel honored” at any attention from a DangerZone.

During the summer before this story opens, just before Cara’s junior year in high school, her mother and step-father moved to a town an hour away from Cara’s former public school and placed Cara in a charter school called Chrysella Prep. Claudia decides this is a great opportunity for Cara to remake herself in a new, potentially very popular image. She can accomplish this, Claudia insists, by carrying out Claudia’s grand scheme for social success, a hundred-page handwritten treatise complete with illustrations called “The Ladder.” If Cara studies and follows this ambitious plan, with Claudia coaching her every step of the way and enjoying Cara’s success vicariously, she can rise through the ranks to the very top of the Popularity Tower.

At first Cara considers The Ladder a really cold blooded plan. It is against her warm, generous nature to calculatedly start with a low-ranked boyfriend and step by step progress to increasingly higher-tiered boyfriends until one of the Populazzi males picks her as his consort and catapults her into the stratosphere of Populazzidom. But finding her first boyfriend—not just the first rung of Claudia’s social experiment, but Cara’s first boyfriend ever—turns out to be almost instantaneous. Cara literally falls at Archer Jain’s feet her first day at Chrysella Prep.

Archer is an enormously talented, cute and adorable Theater Geek. He’s fun to be with, clearly likes Cara a lot, and immediately pulls her into the bosom of his group of zany theater friends. Cara is crazy about him and tells Claudia that if Archer decides he officially wants to make her his girlfriend, she refuses to throw him over on behalf of potential social success. Unfortunately, after six weeks of great times, things go terribly wrong with her relationship with Archer, and it is clear she is never going to be his girlfriend. Claudia convinces Cara that the best way to get over her broken heart is to put herself in Claudia’s hands and follow the steps of The Ladder by attempting a relationship with a DangerZone guy that Cara is physically attracted to. If Cara can become his girlfriend, she’ll make it clear to Archer, and herself, that she’s moved on. But even though the moody DangerZone musician is admired by every kid in school, by associating with him, Cara is drawn into his risky lifestyle and gets day by day farther away from the sensible, kind, well-adjusted teen she used to be before she began to follow the rules of The Ladder.

This book is a superb example of the chick lit genre. The writing is outstanding, and the wonderful plot alternates between scenes that are laugh-out-loud funny and extremely poignant. It is clear from the first that we hear of The Ladder that this plan is doomed to failure and will bring poor Cara to grief. In fact, she herself suspects that from the start. But Claudia is a hilarious Mephistopheles who tempts and cajoles Cara every step of the way along the dangerous path of The Ladder.

Cara is an extremely sympathetic and engaging heroine, and her ultimate antagonist, the Supreme Populazzi, Trista, rather than being a cardboard cutout, clichéd Beautiful Bitch (my term) is a wonderfully layered character. In fact, every one of the characters in this terrific book are fully drawn and fascinatingly complex.

There are few books I can say this about—because I am an extremely jaded reader—but I was riveted to this book, devouring every word. I was at times almost holding my breath, expecting the author to at some point drop the ball and fall into hackneyed writing that so many teen novels and movies with this type of plot are prone to. But she never did. Every scene is well constructed, crucial to the development of the story, and each scene builds on every other in a logical, inevitable, but never predictable way, until the surprising but very satisfying climax.

If you enjoyed the popular 2004 teen film Mean Girls, you will love this book. I highly recommend this book to readers who love a teen comedy with depth, and who like to shed a few tears mixed in with their belly laughs.

Parental guidance note: This book may be too mature for younger teens. Cara experiments with drugs and alcohol, and she and her friends engage in frank discussions of teen sexual activity. While the heroine herself never progresses beyond “making out,” many of her friends do, and it is only a situation beyond her control rather than her own good judgment that keeps her from “going all the way.” Mitigating these sensitive issues, however, is the fact that all of these common teen struggles are presented more as a comically compelling object lesson in the negative results of risky behavior, which makes Cara’s dangerous choices seem anything but the right thing to do. In addition, the author presents multiple teen characters who stress the importance of never driving while under the influence of alcohol or drugs.