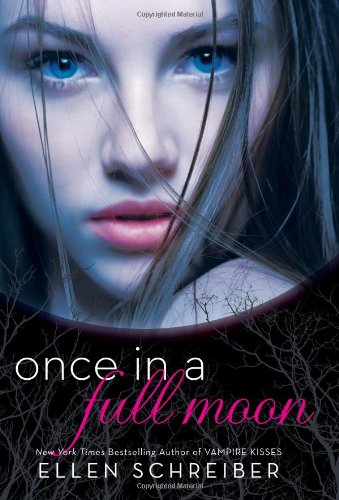 Once in a Full Moon (Full Moon #1) by Ellen Schreiber

Celeste Parker has it all. She’s a pretty girl who’s dating the most popular boy at her high school, a handsome jock whose favorite hobby is playing scary pranks. She also has two wealthy best girlfriends who, like Celeste, live in the prosperous East Side of her town. She and her friends have nothing to do with the lowly Westsiders. They are social untouchables at school because their side of town still has the flavor of the rural community Celeste’s town used to be, before the development of the East Side as the suburban bedroom community of a nearby city.

Unfortunately, Celeste isn’t in love with her great-catch boyfriend. Instead, she’s magnetically drawn to gorgeous, mysterious Brandon, the new boy at school. She’s afraid to act on that attraction though, because Brandon is a Westsider. No boy is worth giving up everything she has–especially her two Westsider-hating BFF’s–in order to be with him. But when Brandon braves a blizzard to save Celeste from a pack of wolves in the woods near her town and is bitten in the process, Celeste can’t resist getting romantically involved with her valiant rescuer. And her solution to her difficult social dilemma is to avoid it entirely by insisting that she and Brandon keep their relationship a secret. Brandon is so taken with her, that he agrees to this humiliating proposition with virtually no protest.

The heroine of this story lives basically four separate lives: Celeste Number One is a “go along to get along” girl who never makes waves and does whatever her stronger-willed, classist best friends propose. Keeping their approval is paramount in her life. Celeste Number Two is a kind, socially conscious person who loves working with old people and is very fulfilled volunteering at a local rest home. Celeste Number Three is in a romance of convenience with a rich, Eastsider boyfriend. Celeste Number Four has a secret Westsider boyfriend, a kind, sensitive boy whose whole life has been turned upside-down as a result of selflessly coming to Celeste’s rescue.

I believe that if it there were no werewolf romance in this book, it would be classified as a “social drama,” given the strong theme of the evils of class prejudice that dominates so much of this story. Ultimately, though, the the author puts the bulk of her focus on the paranormal romance.

That romance doesn’t seem to be fully resolved in this book–no doubt because this is the beginning of a series. There is much more character development and growth that Celeste and Brandon need to achieve before this series comes to a triumphant close.

As for the paranormal portion of the story, I personally found the author’s explanations of how werewolves are made to be somewhat confusing, and the appearance she has assigned to her werewolf is a bit odd. However, the author deserves praise for attempting to be original in her werewolf mythology, and it may well be that neither of these things will be an issue for the intended audience, which I believe is the younger end of the YA scale, preteens and teens between 11-14.