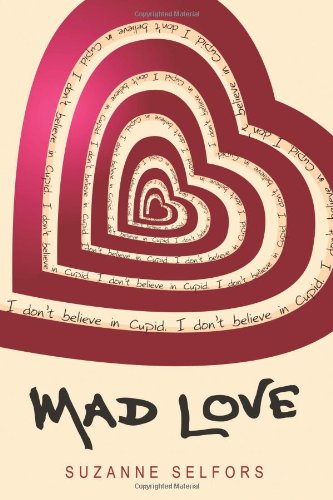 Is it magic or madness? A young adult contemporary fantasy about Cupid in Seattle

Sixteen-year-old Alice Amorous is the daughter of bestselling romance author, Belinda Amorous. Due to her mother’s suffering from years of untreated bipolar disorder, Alice’s family life has been highly unstable, leading to the present crisis of her mother being institutionalized for catatonic depression.

Alice has no father to step in and take care of her, because she’s the product of a one-night stand occurring during one of her mother’s manic phases–and Alice needs help badly. Her mother earned a great deal of money over the years from her writing, but her mania caused Belinda to blow all her earnings, and Alice is now scrambling to pay their bills and keep up appearances so that Social Services doesn’t take her away from her mother.

The one worthwhile manic-inspired purchase of Alice’s mother is the four-unit rental house where Alice and her mother have lived for several years. They share it with a grandmotherly lady named Mrs. Bobot, an elderly minister named Reverend Ruttles, and a nurturing, gay, legal secretary named Archibald. In addition, Mrs. Bobot’s anorexic granddaughter Realm, who is Alice’s age, is visiting for the summer, but she’s no friend to Alice. All Realm cares about is publishing the horror novel she’s written, and she threatens to expose Belinda’s mental illness to the world if Alice doesn’t forge a letter in Belinda’s name recommending Realm’s novel to Belinda’s editor.

The three eccentric adults in Alice’s life are very concerned when, after a sudden fainting spell, she becomes obsessed with a mysterious white-haired boy named Errol and begins to hear his voice in her head. Alice is worried, too, because she isn’t sure if what is happening to her is magic or madness. Is she starting to exhibit signs of the same mental illness that has destroyed her mother’s life? Or could it actually be true that she’s been shot by the invisible arrow of the one and only Eros, commonly known as Cupid?

Ms. Selfors is an excellent writer who particularly excels at quirky characters and situations, and that talent is very much in evidence here. I also enjoyed that all the adults in this book

truly care about Alice. In a delicate, non-preachy way, Ms. Selfors uses every character in this book, even the obvious antagonists like Realm and Errol/Eros, to offer crucial insights to Alice that allow her to grow in emotional maturity in believable ways by the end of the book.

Ms. Selfors is extremely gifted at writing comedy, but in the case of this book, she has created a “dramedy,” a mix of comedy and drama. Her two previous young adult novels, Coffeehouse Angel

, are entirely comedic with strong fantasy elements and light subject matter that is perfectly suited to their humorous tone. In contrast, Mad Love contains less fantasy than either of these books, and it covers much more serious issues, including mental illness in multiple characters, cancer, eating disorders, illegitimacy, and child neglect and abandonment.

In this book, the laughs come as a kind of “comic relief” from Alice’s ongoing painful struggles with the circumstances surrounding her mother’s tragic mental illness. Some examples of this comedy include a scene where Errol shoots Alice with an invisible, magical arrow causing her to yell wild accusations that no one believes, and the first chance Alice has to actually talk with Tony Lee, the boy she’s been staring at every morning for weeks from her kitchen window as he rides by her home on his skateboard.

For those wondering what ages are suitable for this book, it seems to be aimed at preteens and younger teens, that is ages 11-14, for several reasons: In spite of the hard life Alice has lived, she seems very naive for her sixteen years. Her romance with Tony, the skateboard boy, is definitely G-rated. And the inflated way in which the author portrays both Alice’s and Realm’s novel writing achievements is unrealistic to a degree that is usually only found in middle-grade novels.

There is only one situation in this story that is slightly questionable for this age group: Alice’s magically induced obsession with Errol/Eros leads to one brief but sensual kiss, and he shamelessly confesses to Alice that he has used his magical arrows to take (presumably sexual) advantage of countless women over the past 2000 years.