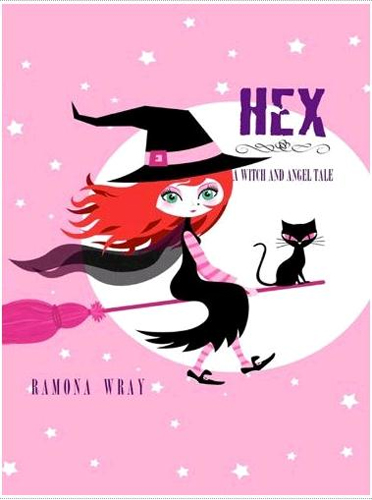 Hex, A Witch and Angel Tale by Ramona Wray

Seventeen-year-old Lily was born a witch with two main powers, the ability to touch people and know all about them, and the ability to create magical candles and potions that actually work for their intended purpose. Because the touching ability also makes her sick at the same time it causes her to know things about people she has no desire to know, she is something of a pariah in her community both by her own choice as much as the fearful avoidance of others. As part of that problem with touching, she has never had a boyfriend. Until the day that mysterious, gorgeous, motorcycle-riding Ryder asks her out.

This book is a quick, easy read with no sex, violence, alcohol or drugs, so parents may not mind if younger teens read it. Lily is an interesting heroine, and I particularly enjoyed the refreshing change that she loves her parents and has a close relationship with them. The story involves what seems to be a love triangle, but not a typical one where the heroine is strongly torn between two boys, which is also a pleasant change from most YA paranormal romances.

The cover makes it seem like this is a comedy, which is the main reason I bought the book. However, there is no comedy in it at all. It is a straight up drama, but not a really dark one.

I had assumed from the title that this might be a series, but it does not seem to be the author’s intention, based on the fact that the ending is neatly tied up.