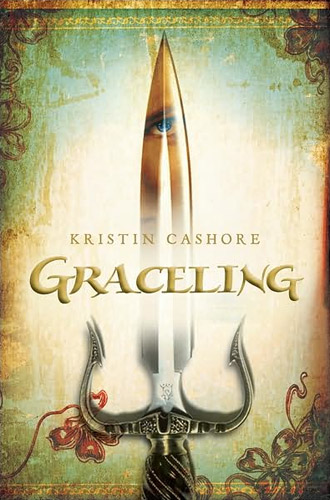 Eighteen-year-old Katsa is a king’s niece in a world where a small percentage of the population of seven different kingdoms have supernatural gifts called Graces. When Gracelings come into their powers in mid-childhood, they become wards of their king. Orphaned Katsa came into her Grace at age eight when she accidentally killed a man who attempted to sexually abuse her. Her uncle, the king, ordered her trained in fighting skills then employed her starting at age ten as his personal one-girl vengeance squad against rebellious subjects. Katsa is emotionally scarred from this horrible work, and at the start of the story she’s in the midst of a secret revolt as the creator of the Council, a rescue league she established to save innocent people from the cruelties of her own king and five of the other six kings.

I am personally not a fan of sword-and-sorcery fantasy. I much prefer light, contemporary fantasy and urban fantasy. Mainly because I don’t enjoy reading about Medieval times, and throwing in magic to leaven the brew has never helped me overcome that dislike. Until this book.

I unequivocally loved it, primarily because of the romance plot, but also because of Katsa. Her power and how it affects her fascinated me. Inevitably, every young-adult fantasy with a strong romance plot gets compared to Twilight, but speaking as a big fan of the Twilight series, I don’t see the similarity. Instead of a romantic pairing of a relatively powerless mortal with an all-powerful immortal, this is a case of two mostly equal partners. Both are magically gifted, and the heroine’s magic is definitely stronger than that of her romantic partner.

At the beginning of the story, the heroine Katsa is emotionally isolated. She has business associates, her two sidekicks on the king’s gruesome punishment missions, a middle-aged warrior who trained her in fighting skills and a handsome young nobleman who, unknown to Katsa, is in love with her. And she has the companionship of her supportive lady’s maid. But none of them are Graced like Katsa and can never understand what it’s like to be universally feared and avoided by ordinary people.

Then Katsa connects with the love interest of this book, Prince Po, and romance fans like me get a truly great First Meet. Not only that, their connection is the beginning of two of my favorite romance story lines: “us against the world” (AKA “no one ever understood me the way you do”) and “two for the road” (a shared mission/journey). Katsa discovers in Po, for the first time in her life, a kindred spirit and potential equal–and vice versa for Po. He is able to keep up with her in hand-to-hand combat, and Katsa assumes he’s a Graced warrior. As they verbally and physically spar with each other, they immediately learn extremely important things about each other: that each has a powerful Grace accompanied with self-control, integrity, and poise under fire.

Po is almost as alienated and isolated because of his Grace as Katsa. In spite of (unlike Katsa) having a loving family who aren’t, in general, intimidated by Gracelings, Po has two problems: He’s the only Graced one in his family, and his Grace is so particularly off-putting that his mother has urged him to pretend he has an entirely different Grace than he actually has. Because of this burdensome secret, Po feels guilty of dishonesty and believes it will prevent him from every having emotional closeness to anyone. As a result, he’s wandered for years from land to land. But in spite of their mutual emotional disconnection from others, both Po and Katsa are what I call Positive Warriors. Negative Warriors employ their strength and skill to unjustly dominate and hurt others. Positive Warriors use their might to defend those weaker than them, and they are some of the most sympathetic protagonists an author can create.

Another aspect of the best romance plots that this book has in spades is that the lovers act as catalysts for important emotional growth in each other. At multiple key turning points in the story, Po does what no one else has ever been able to do for Katsa. He helps her realize that she has the freedom, and responsibility, to choose exactly how she will use her Grace. And at a very key point in the story for Po, Katsa acts as a catalyst for Po, too, helping him make a crucial life-changing choice as well.

I personally think the main romantic conflict separating the two lovers is believable and well motivated, that is, Katsa’s refusal to marry or have children. This is not an ordinary woman. Her mission in life is not to nest and nurture. It is to protect and defend. She has no natural ability or desire to learn, engage in or teach domestic skills or to be soft and cuddly. She’s never been mothered, or fathered, and she has no concept of how to exist in a marriage or make a family.

I enjoyed very much the clean, crisp writing style of the author. In particular, she avoids the irritating distraction of present tense that more and more YA authors are employing these days. And the book is written in close third rather than first person, which is even more common in YA fiction. Close third has all the advantages of the intimacy and close connection with the protagonist that first-person provides, but it doesn’t feel as claustrophobic or make the protagonist sound as narcissistic as first person does.

I am greatly hoping that any sequels

that follow this book will be a continuation of the story of Katsa and Po. There is so much more I want to know about their relationship and so many more adventures they could have as they continue the work of the Council together. I’m personally hoping for a revolution spreading through all the kingdoms until every capricious and cruel king is overthrown. And I’d like to see Katsa marry Po!