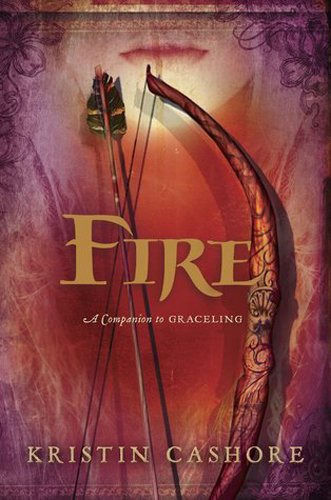 A Fantastic Prequel to Graceling!

Eighteen-year-old Fire lives in a world where she and certain animals and insects are known as “monsters.” But they are not monsters in the way we normally associate with that word. They are all gorgeous, particularly in the exotic color of their hair, fur or skin. And the most astoundingly beautiful of all are human monsters like Fire. Fire was named for her most remarkable feature, long, lustrous hair which is predominantly red, but in reality is made up of multiple colors not found among regular humans, such that it is like rainbow-hued flame. The beauty of monsters, human and non-human, serves to entrance human prey. But far more dangerous than their seductive beauty is the ability of monsters to hypnotically sway the minds and hearts of humans. This innate talent is strongest of all in a human monster like Fire, who is able to not only manipulate the emotions of animals and humans, but to shape their thoughts as well, thereby gaining control over them.

Fire inherited this gift from her monster father. He used his magical powers for evil and encouraged her from earliest childhood to do the same. But Fire made a vow to herself long ago that she would never go down her father’s dark path, and she’s kept that promise ever since. Until the moment arrives when the king and prince of her kingdom desperately need her to help them protect the people of their country from the invasion of an enormously strong enemy army.

, even though I normally don’t much like sword-and-sorcery type fantasy, because the book is brilliantly done. In fact, I loved it so much, I was initially sorely disappointed to hear that this book is a prequel, not a sequel, to Graceling. But within pages of diving into Fire, I became every bit as enthralled with this story as Graceling.

Fire’s personality is completely different than Katsa’s, but they have some strong similarities. The main one is that both have magical powers, and each sees herself as an isolated freak in her society. In both books, Cashore also uses flashbacks to give us crucial glimpses of her heroines’ formative years and the main influences that shaped their character. In both societies, women have access to birth control that gives them a degree of control over their fate that is not usually associated with pre-pharmaceutical historical eras. In both stories, the heroines have a powerful growth arc across their story, both in their understanding of and ability to use and control their magical powers, and, even more importantly, in their understanding of themselves as fierce young women who will stop at nothing to protect those they love–especially helpless children and animals. In both Fire and Graceling, there is a wonderful romantic subplot. Though the personality of the love interest in Fire is very different than Po in Graceling, he’s equally appealing in his own way. Finally, though Fire, like Graceling, is primarily a magic-based “coming of age” story, with all the internal conflict and mental confusion that entails, there is plenty of action and adventure to keep fans of exciting, external conflict happy.

I highly recommend this book not only to teens, but to adults who enjoy fantasy novels with strong characters and excellent, tight plotting. It’s a joy to read from start to finish.