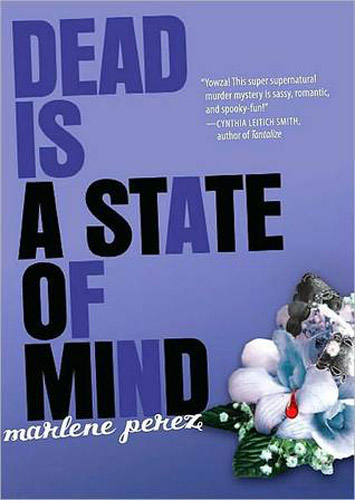 Delightful second book in the “Dead Is” comic, paranormal, mystery series for teens

Daisy Giordano and her friends and family are back for a second, fun-filled paranormal adventure in the wacky town of Nightshade, in Northern California.

A beloved teacher from Daisy’s school, Nightshade High, has been savagely killed, and the signs point to a werewolf as the murderer. The secret, supernatural “Council” that rules over the magical citizens of Nightshade is on red alert, determined to figure out if one of their own is guilty. Daisy is determined to bring her sleuthing skills to bear in solving the crime, refusing to leave the case to the Council, the local police chief, and her psychically gifted mother and two older sisters. After all, not so long ago Daisy saved her school’s cheerleaders from a rogue vampire using her recently discovered psychic talents. Daisy realizes, though, that because she doesn’t have the mastery over her gifts that her family has over theirs, it would be really useful if her boyfriend would lend a hand, as he did with the vampire case. But normally dependable, mellow Ryan has been acting completely out of character lately, showing up late or not at all for appointments with Daisy, bolting away from her with no warning when he does show up, getting into fights with other boys, and taking offense and stomping off in a huff from Daisy for no apparent reason that she can see. Worse, Daisy has noticed him hanging around town in the company of a young woman so lovely, Daisy fears that all of Ryan’s behavior problems are because he’s in the process of dumping her in favor of her gorgeous rival.

Marlene Perez has done it again, creating a wonderful sequel to Dead Is the New Black. Daisy is a strong, determined heroine surrounded by a wacky cast of characters, including assorted werewolves and vampires, Daisy’s precognitive mother, her telekinetic sister Poppy, her mind-reading sister Rose, a gorgeous exchange student named Duke who claims he’s a fortune-teller descended from Gypsies, an enchanted juke box at the local diner that sends messages to Daisy through the songs it plays, and her hunky boyfriend Ryan, who’s keeping a fascinating secret.

This book is a fun, fast read, and it can stand alone without reading the first book in the series. However, there is a lot of information in the first book that would really enrich the experience of this book if read first.

I highly recommend this book to anyone who enjoys light YA fantasy with frequent humor. And for those who have read and loved Dead Is the New Black, I am happy to report there are also three more sequels currently in print. Book 3 is Dead Is So Last Year. Book 4 is Dead Is Just a Rumor. As well as the fifth and final book, Dead Is Not an Option.