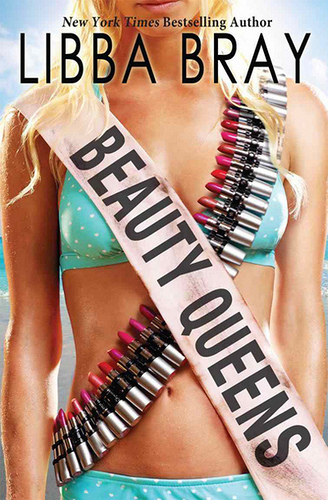 A plane carrying contestants representing all 50 states for the Miss Teen Dream Pageant crashes on a desert island, and everyone but 12 of the contestants dies. How will they manage to survive until they are rescued?

by Lord of the Flies

, The Pirates Of Penzance

, and the James Bond movies

. Comic homages to all of these influences are definitely apparent in this social satire that takes swipes at the dumbing-down and objectification of women via the multi-billion-dollar, international beauty industry, the efforts of mega-corporations to control governments and start wars for their own economic and political gain, international arms smuggling, reality TV, hedonistic consumption of material goods, and a certain ex-governor from Alaska.

I was drawn to this book because I love YA fiction and I love comedy, making the combination of the two irresistible. The book certainly did not disappoint me in terms of delivering laughs, many of them not mere chuckles, but outright belly laughs. Fans of socio-political satire, such as is found on Saturday Night Live, Jon Stewart, Stephen Colbert, The Simpsons, and in Doonesbury, will very likely love this book. Bray has something for everyone by alternating rowdy slapstick (so-called “low” comedy) with extremely witty use of language, including colorful metaphors and clever one-liners and tart comebacks (so-called “high” comedy).

The structure of the novel takes a bit of getting used to, but it does encourage the reader to distance herself (or himself) from the characters enough to laugh at situations that would normally cause shudders or tears if the story were presented as drama rather than comedy. The book is written in omniscient point of view, with a godlike narrator who dives frequently into the heads of the 12 beauty queens and various villains, including the main villain, an evil business empire named simply, the “Corporation,” which is the sponsor of the Miss Teen Dream Pageant. The book begins with a satirical disclaimer from the Corporation, and sprinkled throughout the book between wild scenes with the characters are scripts for commercials for wacky products from the Corporation as well as interviews with the beauty queens that look as though they were requested by the publicity team for the Miss Teen Dream Pageant.

It was lucky for me that I started reading this book early enough in the day that I could finish it in one sitting without having to stay up all night to do it, because I could not make myself put it down. I know that’s a cliché thing to say, but it’s actually true. Three or four different times I got almost physically exhausted by the endless bizarre antics of the characters, but I kept wondering what would happen next and rushed onward through page after page.

There is, though, one part of the book I had a hard time accepting. Of all the many characters in the book, the one I grew most attached to was perhaps the weirdest of the weird, Taylor Rene Krystal Hawkins, Miss Texas. Initially she was just another buffoon to me, but as the story progressed I found her both poignant and powerful, and I wanted far better for her than she got in the resolution. I know intellectually that the comic treatment of her situation, which is quite tragic, is artistically consistent with the tone of the entire book when dealing with tragedy. But all the other tragedy the audience is encouraged to laugh at happens either to nameless subcharacters or villains. I couldn’t laugh at the ending of Taylor’s story. I was rooting for her strongly, and I wanted far better for her than what she gets.

Parental guidance: Drunkenness, explicit sex scenes, violence (thought it is mostly cartoonishly depicted, as in a James Bond film). If this were rated like a movie, in my opinion it would be R-rated, suitable for teens over the age of 17