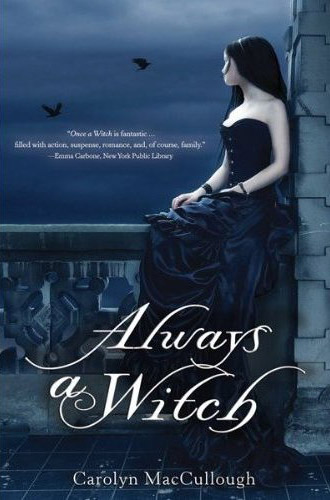 Book 2 of the Witch Urban-Fantasy Series for Teens

Note: Please do not read this review if you have not read Book 1 of the Witch series, Once a Witch

, because there will inevitably be spoilers for that book.

Once again 17-year-old Tamsin Greene’s life is strongly influenced by one of her grandmother’s prophecies, in this case that she will soon have to make a huge decision that could affect her family’s very survival. After the events of Once a Witch, Tamsin has become fully aware of her enormous Talents as a witch. Other witches’ magic has no affect on her (a common motif in many traditional fantasy novels, as well as an ability of Bella in Twilight, but still quite intriguing here), and if other witches use their magic against her three times, she absorbs, but does not steal, their ability (much like Peter Petrelli in the TV series, Heroes). She also knows that the evil witch family, the Knights, have a long-time blood feud with the Greenes, because the Greenes found a way to inhibit their magical power. The Knights are determined to get their magical power back, and they will stop at nothing, including murder, to accomplish their goal.

The action begins in Book 2

when Tamsin discovers that the villain from Book 1, Alistair Knight, has traveled through time to Victorian-era New York in order to help his ancestors wipe out Tamsin’s before they can halt the Knight family’s magical crimes. Tamsin is determined to go back in time just prior to Alistair’s arrival and cut off his scheme, but she refuses to let anyone else get involved. If someone is going to be killed in this overwhelming mission, she is determined that the only loss of life will be her own.

Unfortunately, without her boyfriend Gabriel along as he was in Book 1, she can only manage a one-way trip to the past. She also doesn’t have the assistance of his other crucial Talent of being able to find anything in her quest to locate and warn her Greene ancestors about Alistair Knight. As a result, Tamsin has no luck in her search for the Greenes, but she stumbles on the Knight family when she is offered a job as a lady’s maid in the Knight mansion in New York City.

Tamsin quickly shifts direction and sets herself up as a mole within the Knight family in order to prevent the vicious matriarch of the Knight family, La Spider, from connecting with Alistair. Unfortunately, her task is made much more difficult when she is forced to resist the seductive charisma of the magnetically handsome and magically compelling Liam Knight, the eldest son of the family.

This book is not only a worthy successor to Once a Witch, but actually in many ways even better. Tamsin continues to be a dynamic heroine who is extremely sympathetic because of her willingness to sacrifice herself for the greater good. She is also a true survivor, as evidenced by her willingness to improvise and persist against overwhelming odds as she deals with the horrible Knight family in the 19th century, completely out of her element, cut off from all support.

The writing throughout this book is very well done, both as to the actual words on the page and the content of those words. The urban fantasy world-building continues to be well executed, the time travel element in particular. Tamsin’s relatives and magical enemies are very convincingly portrayed, particularly Liam Knight. He is the best kind of villain, a multilayered one who is both attractive and repulsive at the same time.

In this book, unlike Book 1, Tamsin doesn’t smoke, and though she does drink a beer that is offered to her in the 19th century, it is more as a thirst quencher rather than a mood-altering substance. However, Liam’s sexually seductive attitude toward all females, including Tamsin, may cause some parents to judge this book less suitable for pre-teens and younger teens than Book 1. The age range for YA extends from age 11-19 according to YALSA (the YA portion of the American Library Association), and I would personally peg this book as appropriate for the more mature end of that range, for teens 16 and above.